Just finished working on these fellows.

I give you "N0. 8 Independent Company, Halflingland Rifles", or as they are more commonly known, "Giglamp's Company of Hirsute Foote".

The "Rifles" in their title was added by 'Orse Guards in an effort to lend the independent companies some eclat. In fact, with the penury for which His Majesty Kynge Gorge's Ministers have a well deserved reputation, the Halflingland Rifles are armed with old cast off weapons that have gone past their sell by date. "Rifles" in fact merely denotes their role as light infantry. 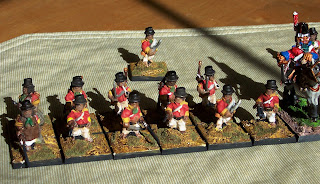 No. 8 IC is charged with keeping His Majesty's peace around the Honorable East Valonian Company's factories on the west coast of Afri. However unlike many of the Halfling units on the lists, the IC are Crown, vice Company establishments.

"Keeping His Majesty's peace" includes such Diverse tasks as protecting the settlements from raiders, both to land and seaward, anti-piracy operations, breaking up smuggling rings, and the surprisingly unpopular with the locals task of suppressing the slave trade. It would seem that those who are slaves are actually quite appreciative. Everyone else sees it as an infringement on their rights and religious beliefs.

Above all, of course. the ICs' main concern is preventing those demmed Ferach Elves from making any inroads in the area.

Given the tasks they have been set, it comes as no surprise that the IC's often work closely with the fleet. In fact joint IC/Royul Marine operations are quite common. 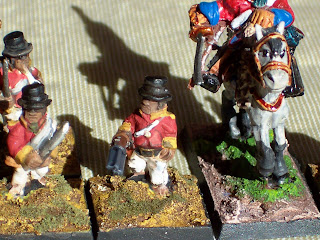 While most of the IC's weaponry is sub standard, Captain Giglamps, through the auspices of his legendary Uncle Rogipoos, has been able to equip two of his picked Halflings with Nock Volley Pistols.

The short range and generally poor performance of their hand guns is actually not much of a bother for the Halflings, who are avid practitioners of  "one close volley and at them with the bayonet"...which they actually wield as swords. 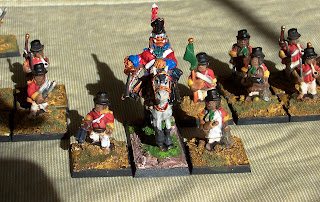 No. 8 IC has a paper strength of 50 Halflings and three Orc or Rat officers. In practice it has never been near full strength. To be sure there are always at least four armourers, identifiable in the miniatures by their long leather aprons, and three sergeants. Captain Giglamps is at present the only officer.

Western Afri is known as "the Orc and Rat's Graveyard" due to the high mortality rate amongst those hardy souls who have forsaken Albion and Joccia for the  region. Few wish to take service with  the Halflingland Rifles and of those who do, well, their tenure tends to brevity. Giggers is of course an old Afri hand and so, Gentle Reader, you need have no fear on his account.

As for the actual figures...

Naturally I started with a unit of Halflings,  painted by the good folks at Alternative Armies. The Halflings are only cast with a variety of hand weapons and do not tote firearms by the rules of Flintlouqe and Slaughterloo.

I converted the figures by replacing some of their hands with plastic parts from Games Workshop and Wargames Factory kits. Most of the rest received holstered weapons, from the same sources, on their backs.

The sergeants, fanion bearer, and one of the rolling pin armed cooks were left as they were.

Still working on a monkey servant for Giggers and awaiting a musket artillery piece to serve as a "company gun".

No. 8 IC is destined to play a roll in aiding the Great Jeh See Pasha fend off the Ferach assault on Hafaker...