Getting Old and Slow

Back in the day, if I could find the time, I could knock out a batch of 20 to 30 figures in a couple of days. 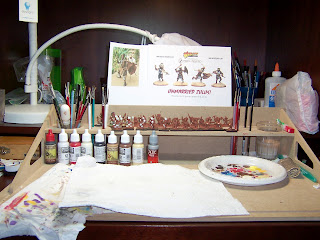 I've got a batch of 50 dwarf Zulu, who will end up being Halflings by the way, that I started today. I was figuring on finishing 12 a day, leaving the two command figures for a later time.

Well first the beige went on all twelve.

Then the ivory on six of them.

Now I am going to do them in batches of six, which will double the time it will take to complete them.

But I may not do any more with them today. 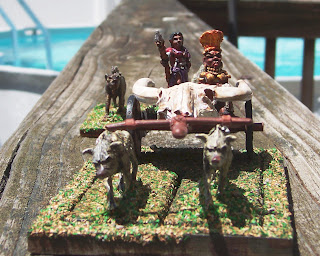 Some photos of Queen Roo Di Shia and her attendants. 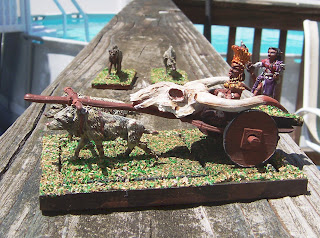 Painted these figures while gearing up for Roo Di Shia's Revolt the cause, and first skirmish. of may be read here. 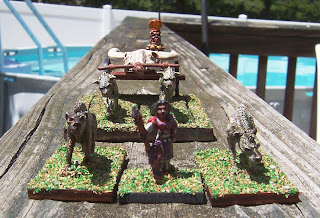 The Queen is a Reaper figure. The chariot, draft hyenas and charioteer are from Old Glory. 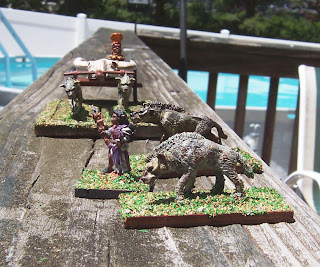 Her faithful hyena's tentatively named "Dobie" and  "Gillis" are also from Reaper. 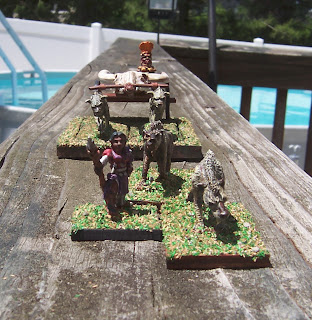 Afraid the photos are a bit shadowed due to my poor notice of the sun's position.

Hope you enjoy them and we will be seeing more of her halflings in the coming days.

Thanks for stopping by!
Posted by M. C. Monkey-Dew at 1:59 PM No comments: 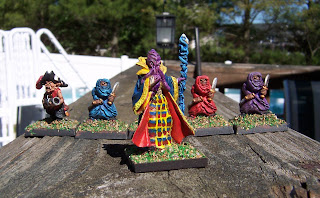 Here he is in all his Glory... 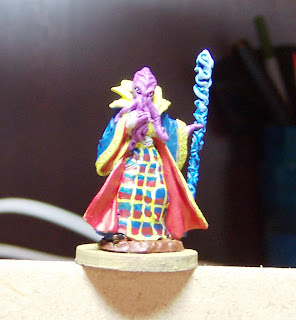 This is Henry, the most recent recruit to the cult of Wig-El. As you may have guessed he likes to dabble in the Black Arts (or Blue in his case), and he's none to happy about Mordred's Annul of Wylde Magyk.

Fortunately for him in the wilds of Darkest Afri some things still walk Valon that others have thought long gone.

Henry is a Reaper figure as you may see has neither been washed nor based yet.

Email ThisBlogThis!Share to TwitterShare to FacebookShare to Pinterest
Labels: Flintloque 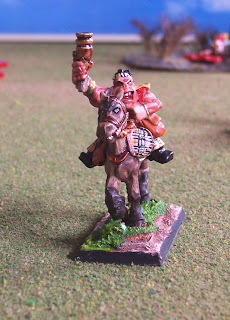 Here he can be seen surveying the carnage that befell Capt. Staines' detachment at Two Gala River.

While most of Albion was suffering at the hands of the Leaddites, the Marquis was able to keep his foundries running at full pace. Each time one of his new "machine engines" displaced some of his workers, Burr-Berry made sure that his former employees and their families remained housed and fed.

Soon faced with a surplus of idle orcs, given to carousing and generally causing mischief, the Marquis decided to raise a regiment of Foote. This also provided a fine opportunity to give his youngest son, Kev, a purpose in life as well as a career other than said carousing and mischief (at which it must be said Sir Kev is well accomplished). 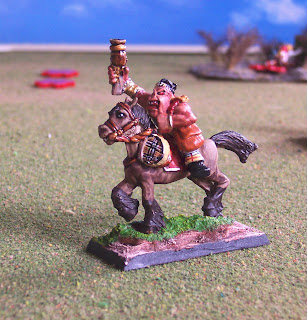 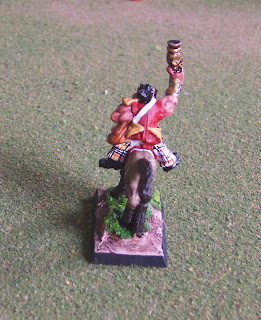 First sent to Catalucia to join the war against the Ferach Elves of Amorica, it was soon clear that the 115th was not up to the standard of discipline Lord Wheeling-Turn expects from his troops. 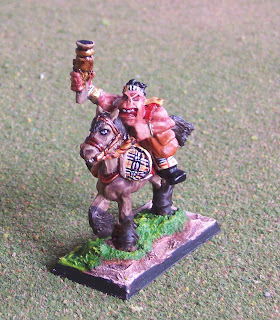 It wasn't long before Wheeling-Turn sent the Chavchesters and that "jumped up Lead Monger, Blyng" to Afri's sunny shores and  here the 115th experienced their baptism of fire, or more properly spear points, as Captain Staine's detachment inadvertetly sparked "Roo Di Shia's Revolt" or as the halflings call it "The War of Orcish Agression". 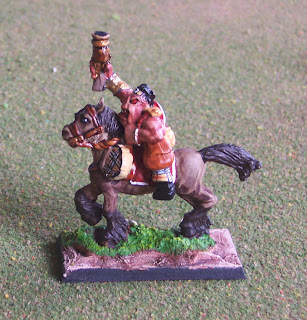 As for the figure itself, Sir Kev started life as an Orc Deserter Leader, studio painted by Alternative Armies.

The addition of the tartan on his breeks, canteen, and headband was the starting point.

Turning his jewelry from silver to gold and then carefully inscribing KEV into his wrist bracer completed the job. 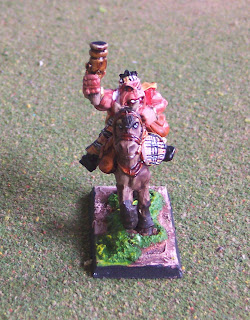 Hope you enjoy the figure. Be assured he will be appearing on the battlefields of Afri, most likely using the Muskets and Mohawks draft rules or Company of Flintloques soonish.

Next project is Queen Roo Di Shia herself...

Thanks for stopping by.

Captain Mildew Staines was worried. It had seemed a simple enough assignment; take a patrol of a sergeant and 10 orcs of the 115th Foot, "Kev's Own" Chavchesters, and escort the tax collector to the Isea N Eehigh capital and back.

Now here he was, troops formed in line. Backs to the Two Gala River. Facing down a crowd of angry halflings while the tax collector makes good his escape.

It had all started innocently enough. A couple of the private orcs had bested Queen Roo Di Shia's daughters in a spoken word contest. Never the best move to show up Royals, but still, a faux pas at worst, not a diplomatic incident surely?

When Queen Roo Di Shia learned that her daughters had been "rapped" by the Chavchesters, it all went pear shaped and fast...

Het-halfling Rud Ihb Eggah reviewed  his warriors' dispositions from atop a rise. The youngest halflings were out to either flank. These would be the horns of the bull. Their mission to draw the orcs' fire all the while working around their flanks to cut off their retreat across the river.

His more seasoned warriors were evenly divided between the head and loins. The head would charge the center of the orc line once the horns were in place. The loins would act as a reserve, being sent where they were needed most.

This game was born of my desire to play a game of Flintloque, where my side would employ the horns of the bull formation most closely associated with the Zulu of South Africa. The photo captions tell the tale of the game. The text will blather on about the rules, background, and etc.
From the start I planned to take on the role of the halfling leader and leave command of the orcs to the game system. Flintloque uses a points system to "balance" games and a quick tabulation gave me some 20 halflings vs. 12 orcs.
Halflings are fierce hand to hand combatants but with only one would are very prone to damage. Add to that their Irregular status, which would render many of them "shaken" for each halfling lost and you can see they are a very brittle force. As a final note, these halflings do not use missile weapons. They are strictly melee troops.

The orcs on the other hand are the very salt of the earth. Good but not spectacular in hand to hand, they are good shots, fairly steady, and take three wounds each! The hard hitting orc Bessie musket would likely shred any poor halfling it hit too. I would have my work cut out for me.

The solo rules certainly handled the orcs differently than I would have. Their initial move seemed completely chaotic as some raced to fight one horn and the rest the other. However by the end of the second turn, their strategy became clearer.

A small portion of their section took the offensive against my left horn, while the bulk of their troops formed a firing line and prepared to receive my right horn. Well done AI.

Their tactics nearly paid off as a single orc on my left flank charged almost to my base line and my left horn lost all momentum.
My casualties mounted as the orcs, safely out of my reach, poured fire on my advancing halflings.

Soon I had lost five figures to the orcs' one. Even with my numerical superiority it was not a winning exchange rate.
And here a more subtle aspect of the differences between halfling and orc appeared. In Flintloque, players have a very limited number of Command Points that can be spent to grant certain bonuses. In the past I have used these most often to negate hits and keep my troops in play.
However with the single wound halflings this was not a very effective tactic. Often a Bessie hit or melee loss would result in a single figure taking 2, 3, or even more hits. Being able to remove even a single hit from an orc could keep that figure in play.

The same can not be said for a halfling. One must remove every hit inflicted or the single wound figure is lost.
With that in mind I ended up using most of my Command Points  to counter the ill effects of nearby losses on my Irregular warriors.

As a single lost halfling meant that all others withing 15cm were shaken, and possibly useless in the following turn, being able to rally these figures quickly was of prime importance.

Being out of practice with the rules, I made a few errors here and there. Fortunately the majority of mistakes favored the orcs.

The game was a good learning experience. A human opponent would probably been better able to exploit my fumbling execution of "the plan". As it was the solo engine did a good job responding to threats as they emerged.

I'll be quiet for a bit and pick up the monologue after the pictures...


And so it came to pass. I lost seven halflings for eleven orcs fallen on the battlefield and one run off to Sentinel knows where.

Like many asymmetrical battles the casualty  count belies the close run nature of the engagement. My forces were too spread out which left me liable to defeat in detail as each element became engaged. It was only the luck of the dice that saved me.

Still given the irregulars' susceptibility to becoming shaken, it would seem that advancing in several discrete maneuver units is better than an all in one mass approach. I suspect the best approach would be to keep small groups of halflings, more than 15cm and less than 24 cm apart. This would prevent having too many figures shaken by losses while keeping the groups within double march move distance to make it easier to reinforce critical points.

As a final note, a section of halflings must be difficult to nurture through en extended Flintloque campaign. Each time a figure is removed from play during a game you have to roll after the battle to see if the figure was  killed, or grievously, seriously, or lightly wounded. If you are very lucky the figure may return to you unscathed. Sadly each class of wounds requires the figure to permanently lose one or more wounds. As halflings have only one wound even a lightly wounded halfling is as good as dead and will not be rejoining your section.


...All was bustling activity after the tax collector, his team near dead, arrived at the Station. On learning of the events in Roo Di Shia's village, Sir Kev assembled the troops, and rushed to Captain Staines' relief/


I'm planning on this being the start of a campaign that will eventually involve Giggers and the Halflingland Rifles. Don't think I will use Flintloque for the coming battles as they will be larger affairs.

Well until next time, thanks for stopping by!
Posted by M. C. Monkey-Dew at 3:32 PM 5 comments: