A Busy Day Beyond the Green River

After yesterday's action one band of greenskins broke free of a pursuing lance and raided a homestead. Bad news all around, it effectively canceled out my victories of the day.

Today a band of settlers crossed the Green River just as two goblin warbands were making their way south to the same location.

There was nothing for it but to try an interception, and intercept them I did.

One force of a lance and my woodsmen made contact with the west most band.

I am experimenting with reducing any player force down to six figures in a bid to make the game more accessible for folks just starting out in the hobby. In this instance it means my force of 6 Rep 5 woodsmen, 1 Rep 5 knight, 1 Rep 4 sergeant, 2 Rep 4 billmen, and 2 Rep 4 crossbowmen, were reduced to 3 Rep 5 woodsmen, 2 Rep 4 billmen, and 1 Rep 4 crossbowmen.

My six stalwarts entered a heavily wooded area, woodsmen to in the van, others in a loose second rank. 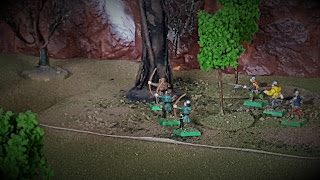 For once no PEF was immediately visible so the lads fanned out to take covered positions at the edge of the thick woods. 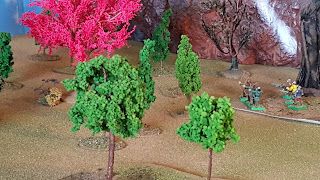 The way Swordplay works, the possible enemy forces (PEF) will always move towards you eventually so unless you are raiding, if you find a defensible position in there is really no reason to move from it. They WILL come to you. 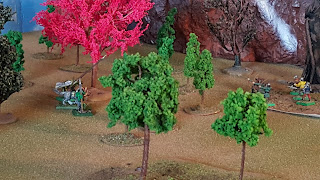 And soon enough they did.
A Rep 5 great orc, Rep 5 rider, and Rep 4 orc appeared out of the shadows.

Naturally they charged as melee troops will. 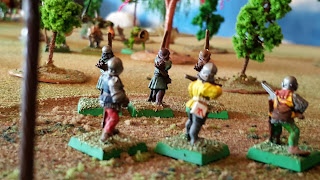 The woodsmen loosed a flight of arrows. Two missed and the one that hit did no damage! 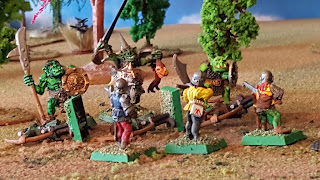 In the ensuing melee all three woodsmen were cut down and my remaining troops fled!

A black day indeed as my only company of woodsmen was destroyed and the lance put to flight.

Further west...
A force of six Rep 5 knights and six Rep 4 mounted men-at-arms rand down the second raiding party.
Scaling this force down left me with three knights and three men-at-arms. 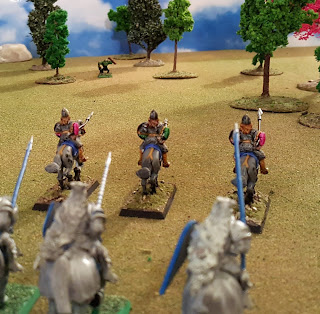 This time I decided to lead with the Rep 4 troops and keep my Rep 5 knights in reserve.

The first PEF did indeed appear in line of sight and turned out to be nothing.

The second PEF was resolved... 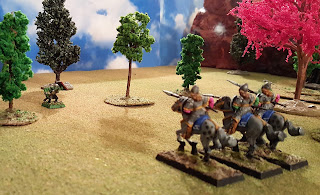 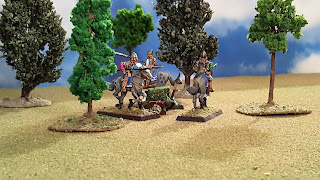 The third PEF resolved as nothing at all  and so ended the second game in a much needed, if rather lopsided, victory.

Technically this ended turn 7 of this season.

However, as one does, I have been tweaking the force levels in the game to achieve a balance between difficulty of the challenge presented to the players and simplicity of play. With that in mind I am calling this season to a halt and embarking on a new season tomorrow.

Until then, adieu and thanks for stopping by!
Posted by M. C. Monkey-Dew at 7:38 PM