Snow everywhere. Well around here anyway. Seemed like a good day to play the obligatory Cossack attack on the retreating Grande Armee'. 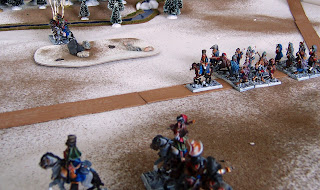 An ad hoc Ligne company trudges through the snow in column of companies while an understrength squadron of mixed horse scout to left and right.

The enemy appeared by random roll, straight ahead in three large groups.

The Cossacks attack left, center, and right. The mixed horse race past the infantry to reform behind. 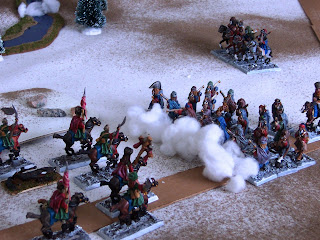 The center Cossack unit is decimated by a close range volley. The Cossacks lose their hetman as well as the gorup leader.

The cavalry counter-charge! The left flank Cossack unit is routed! On the right the Cossacks and cavalry pass, with the cavalry losing half their number.

The cavalry pursue the two fleeing Cossack groups, while the infantry turn the third rank 180 degrees. 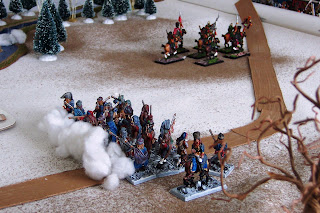 The only surviving Cossack leader thinks better of continuing the conflict and rides off to consolidate his position as the new hetman.

The Grande Armee' lost only two cavalry figures or about 10 troopers.

The Cossacks lost 12 figures of 31 engaged and 3 out of 4 leaders. A dismal performance by any standards. However it is worth noting that in the two flank melees the Cossacks enjoyed a 2:1 superiority. Had the cavalry been routed the infantry company would have been in a precarious position, having to trade the security of all round defense, for continued movement down the road. If the Cossacks could have conducted a second charge at the right time the issue would have been very much in doubt. As always you may click on the photos to see a larger version.

Figures are from Alternative Armies.
Posted by M. C. Monkey-Dew at 4:33 PM 3 comments:

Having detected the warriors to the south west, Fetterman hatched a cunning plan. Grummond's cavalry was to confront the new threat, while the infantry retired along the Bozeman, hopefully keeping the pursuing warriors at bay with controlled volleys.
Grummond duly formed line and dismounted, releasing the horses to fend for themselves. If any of his men were to leave the valley they would do so on foot.  The repeater armed cavalry quickly put a stop to the threat of encirclement from the southwest but not without loss.

Meanwhile, the infantry succeeded in keeping the main body of warriors at arm's length. Things were looking up for the US.

Naturally the next batch of warrior reinforcements appeared in sector 5, right behind the infantry line. Worse yet they resolved into two mounted warbands which promptly charged. One infantry figure went down doing a fair impersonation of a pin cushion. The remainder broke and ran.

Any veteran of the frontier knows that running from warriors is seldom the correct move. Soon the shrieking and whooping foe were riding among the fleeing troops counting coup and wreaking havoc.

Emboldened perhaps by the success of their fellows, the warbands to the southwest, redoubled their efforts and overran the cavalry skirmish line.

It was all over in a matter of minutes.

In the end the entire US force was eliminated for the loss of eight warrior figures out of the fight, about half that number fled, and a few ponies slain.

Had I accepted the loss of Fetterman's infantry as a fait accompli, Grummond's horse could have been saved.

The infantry having taken possession of the rocky summit of Massacre Hill would probably been able to hold off the warriors long enough for the mounted troops to have made their escape.

Still from what I have read of Lt. Grummond, he would have chosen to stay and fight rather than have a cloud cast upon his bravery by abandoning the infantry to their fate.


As was the case historically, Captain Ten Eyck's relief column was treated the sight of warriors riding too and fro, shooting at something on the ground and taunting him to come down off Lodgepole Ridge and have a go at them. The Captain wisely declined the invite.
Posted by M. C. Monkey-Dew at 9:29 AM No comments:

The initial turn started with the Possible Enemy Forces (PEF's) in sectors 5 and 6 turning out to be false alarms. That was a good break. The PEF in sector 4 resolved into a single warband. None of the other PEF's were visible.

Knowing a good thing when he saw it Fetterman turned his skirmish line about and headed back for Lodgepole Ridge (the exit area). Grummond's detachment also headed south down the Bozeman.

The following turn the warband continued to close while one PEF to the west also resolved into a single warband across the Peno. The recently removed PEF's all arrived on the west side of the table deep in the piney woods.

Meanwhile Fetterman moved his line towards the summit of Massacre Hill, while Grummond continued south on the Bozeman.


The eastern warband moved up hill as well and loosed a hail of arrows that fortunately had no effect. The infantry fired a volley, dropping two warriors and sending a third running. Only the Rep 5 warrior was left.

With the first shots of the game fired, warbands continued to pour out of the woods.

Worse yet, a combination of PEF placement die rolls and lack of visibility from the infantry position led to a buildup of PEF's to the south west corner of the table.

The Rep 5 warrior band was finally dispersed as its Rep dropped to 3 and it failed its Been Shot At test and fled.

The Bozeman was clear but for how long?

Turning the infantry line about and reaching the summit one can only imagine Fetterman's reaction on seeing the woods below him roiling with warriors out for his hair.

And there we leave the tale for now...

Fetterman: The Hundred in the Hand: A Six Gun Sound: Blaze of Glory Scenario

In a recent post on www.theminiaturespage.com , Armand asked, among other things, if anyone had played a game of the Fetterman Fight. Indeed I had a long time ago. Spurred on by that post is an updated version of the scenario.
The following scenario is written with our Two Hour Wargames’ “Six Gun Sound: Blaze of Glory” rules in mind.

Fetterman: The Hundred in the Hand 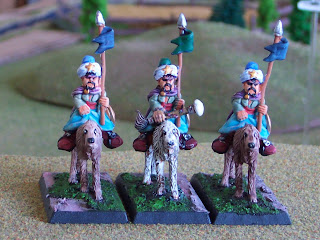 I'm just putting the finishing touches on Bettan Ah Bey, the Halfling Mamluk ruler.  He holds the jewel encrusted staff of office crowned with the skull cap of Bobtal Naiq, whom he defeated in order to assume power. He rides a white saluki hound as befits one of his stature.
Bettan Ah Bey will both lead the Mamluks against the Ferach Elves of Mordred, servant of Nap-O-Leon, and also against the Ottermen and Albion Orcs that replace the Ferach.
Sadly Alternative Armies only has one pose of mounted Halfling currently and I needed to make this one stand out a bit; a leader of Halflings and Otters.
Posted by M. C. Monkey-Dew at 10:16 AM No comments:

It is with great joy that I write to you of a signal victory over the Rebels in Kyng Gorge’s colony of New Albion.

The flank companies of the 4th were dispatched under the able command of Major Petcairn to round up Rebel supplies known to be in the environs of Hexington and Cromford Mound.

Upon reaching Hexington Major Petcairn discovered Rebels assembled in Arms lined across the common. One of the Rebels fired and the Major quite correctly returned fire, dispersing the Rebels with a charge. Soon other detachments of Rebels were discovered sniping from cover along the route of March. In each case the demmed Rebels were dispersed.

Major Petcairn apprehended Rebel agitator Amuel Sadams hiding in a cupboard in a Tavern b’ Sentinel. According to the Major, Sadams was well out of his head and only capable of gibbering and raving of “Thyngs Orcs were not meant to Know” and “the Old Gods of this Verdant Lande”.


Upon reaching the, uh, “Tavern” known as Myrmidon’s House a large force of Rebels was spied approaching from the North. This force was great in number. The Major deployed the Light Company in Myrmidon’s House and fields, while the Grenadiers formed line just to the West. The now usual volley and charge with cold Steele set the Rebels running. During the fighting Myrmidon’s House was set afire. This was purely an accident of War and not the deliberate burning and pillaging of “Goode Honeft Fettlers” one may read of in certain Rebel Pamphlets.

From here the Major proceeded to Cromford Mound, and here the tale takes on the dimensions of Heresy. The Mound is a structure of great Age, and none could be in its environs without a feeling of dread so I am told. The stone work and carvings are like nothing we have encountered before and in truth to gaze upon them too long is said to court a certain Dizziness and Light Headedness not at all like that engendered by a good helping of Porte!

Having expected to find stores of Arms and Provender the Major was appalled to find instead a veritable charnel house. Not an inch there was not covered in blood and the stench is said to have been worse than that of the lowest Rookery of Londonium!

The Mound is cited on the land of one Squire Whately, and no amount of enquiring amongst the locals was able to produce knowledge of his whereabouts.

While the Major was engaged in this phase of the expedition, I taking the remains of the regiment and a company gun followed the Major’s trail. Leaving three companies in Hexington, I marched the rest and the gun to the sound of fighting to the West.  After some, dare I say tense, moments our forces met and I took charge of the prisoner and the casualties. The Goode Major was well shaken to say the least. Yet I left this detail out of my report to ‘Orseguards, lest it reflect badly on him.
The Major lost 18 from the Light company and 12 from the Grenadiers in this action, an action that confers upon him and the Orcs under his command, great credit.