Giglamps at the Notables Club

"If a Gentlemen is Known,
By the State of his Dwelling,
Let's say that my Quarters,
Are really Quite Telling." 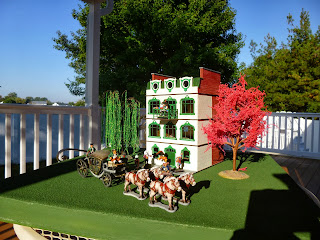 On those all too rare occasions when Giglamps can be found in Londinium, he always stays at his club; The Notables.

Deuced bright this morning so apologies for the somewhat stark nature of the photos.

This building is from Sarissa Precision, marvelous company with which to have dealings by the by.

It comes unpainted in kit form made from lasercut MDF. The trim in and around the windows and doors, as well as the balustrade are laser cut card of a decent thickness.

I do need still to add some chimneys, the openings for same are 6mm circle and as fate would have it the only drinking straws we have in house are 7mm. However I do know that 6mm examples exist and so shall bide m' time in that respect. 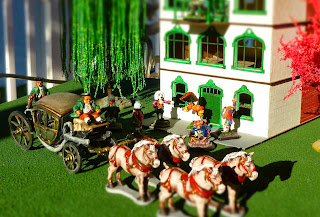 Each floor is detachable and in fact modular, meaning that should I pick up a few more buildings in slightly different configurations, and providing they were painted in a similar manner, it would be a simple matter to mix and match for taller, shorter, or just different appearing structures. 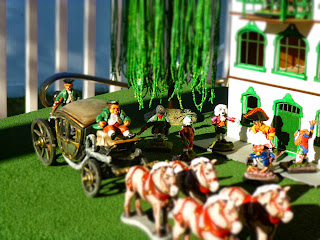 Painting was pretty straight forward, although it must be said that I didn't much care for it.

The card bits were inked green, to give them a more vibrant look.

I suspect the building looks more Victorian than Regency but that is fine as not only will it represent Valon's Notables Club, it shall also have to soldier on into the Victorian, as well as the Sweeney eras!

Naturally some scenarios based on the Club are in the works. Just deciding if it should have fixed grounds, giving it a more organized yet harder to store setting, or left as is, giving much greater flexibility.

In any event, I do hope you enjoyed the photos and thanks for stopping by!