Although not a common topic in western wargaming, I have been increasingly drawn into Chinese history. English language references with of any great detail are sparse though, so I opted to trust DBA!

Ian very kindly provided me with two painted DBA armies and some extras. Those of you in the know already know that Irregular have a tremendous range of figures ranging form 54mm down to 2mm. It is really quite astonishing.

The figures are "true 25's" and are a bit smallish next to more modern 28mm figures. It's mostly noticeable when it comes to horses, but some may find this off-putting. Not a problem for me as they currently make up both sides and I don't mind the difference compared to the 80's era Citadel and Alternative Armies figures they will be mixing with in their adventures.

As an added plus the infantry fit just find on Warhammer Human Standard 20mm square bases!!!

The order was processed quickly, painted to a fine standard, and...Ian being unsatisfied with one of the castings he planned to use as too early for the period, up and sculpted a new figure to suit.

I  have based these figures individually. This allows for their use in element based games with the movement trays shown, or as is more likely in individual figure games.

I intend to use them with Warrior Heroes: Armies and Adventures as I continue to update that title.

I've only shown the Shu army here. The Wei army is pretty much identical both in look and composition. This was a deliberate choice on my part. As in the War of the Roses, during the Three Kingdoms period warlords and their retinue changed sides with sometimes confusing frequency. This is a boon for me as the entire force can be fielded as a single army as needed.

On a final note although I  have based these fellows I have yet to flock them. Too busy with the long delayed Winged Man conversions to get to flocking them now:

More on that anon.

As for Irregular Armies I give Ian a big thumbs up, and a warm thank you!
All in all I am very satisfied with Ian's services and look forward to purchasing more in the future.

Recently I've embarked on a project to make sure that all of my Great Britorcn battalions have two standards, both the Kyng's Colour and a Regimental Colour. For the Orcs this was no problem as in fact each battalion already had both. No the trouble lay not in Albion but in Joccia and Taffsea. These battalions are sold with one standard, er... standard. Although come to think on it now, the Guards, needed  second standard as well.

Many of the orc battalions carry standards designed by the good folk at Alternative Armies. For my regiments, the standards are often designed by manipulating an image of one of the "official" standards.

Here now are some photos: 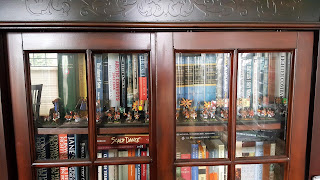 The colour parties of 14 regiments of Greate Britorcn line battalions , ranged by seniority from the 1st Foote Guards on the viewer's left to the as yet unnumbered Toad Hall Fencibles on the left.
>Nine orc, three rat, one hobgoblin, and one weasel battalion all ready to take on the Elven menace. Depending on theatre and time these are brigaded with Al-Garvey goblins, Brewswicke Dwarves, Hunvarian dogs, apes and rabbits of the United Provinzes of Fruit and Veg, units of the Kyng's Giant Legion, or goblin, halfling, and otter sepoys of the HEIC.
Not pictured are the light infantry battalions, horse, and guns. 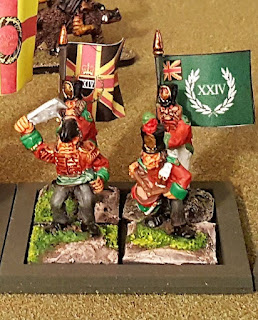 The HobGobs of Harleck, renowned for their fighting both in Aegypt and Haflingland. The origins of their motto, "Faaaasends of 'Em" is lost to the vagaries of time. 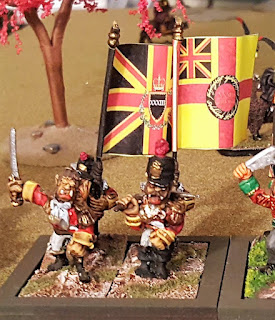 The South Morder Regiment, one time unhappy home of Riekard Sharke. Their motto, I dare not repeat here. 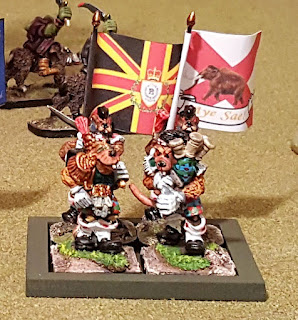 The Strathcarnage and Killmore have a chequered history. During the Mammothite Rebellion they were raised by the supporters of Wee Woolly Prince Charlie. In more tranquil times they were taken into the Albion Line in recognition of their fine fighting skills. Their Mammoth Badge and motto "Aye Sae!" are said to represent their ties to "The King Under the Glacier" 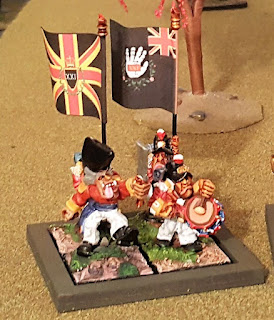 >The Eyes in Gourds, motto: "Come and have a go if you think you're hard enough!". 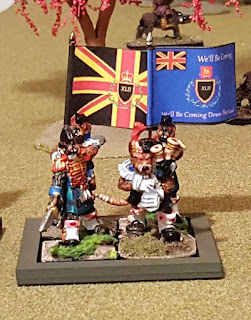 The BlackWatchit: Motto: "We'll be Coming, We'll be Coming Down the Road" is apparently a reference to this "Tartan Army" being always ready for a Barmy. 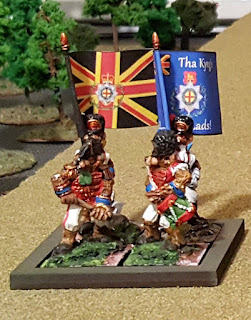 The Coldscreamers' Motto "Tha Kyng's Awrite Lads!" hearkens back to their role in putting down the Mammothite Rebellion, where their loyalty to the House of Hunvaria was never in question. 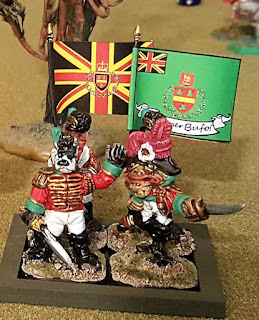 The Toad Hall Fencible Legion, raised by, and at the expense of, Sir Hector Toad, has been taken into the line by a cost conscious Parlement. Their motto is that of the Toad family: "Semper Buffo!"..."Always Toad".