Been working on this one a bit. Hope to send it off to Ed soon.

Basically your character can choose to lead the first assault party into a breached fortress wall.
Success will yield great rewards.
Death or maiming is more likely.

They start out just before first light and hope the French sentries won't notice them until the very last possible minute.

In the event they were noticed right away...

Shots rang out. Carcass lit the morning. Fougasse turned the ground into so many mini volcanoes.

Sharke was hit twice by musket balls and took a pummelling from a mine but still he carried on. 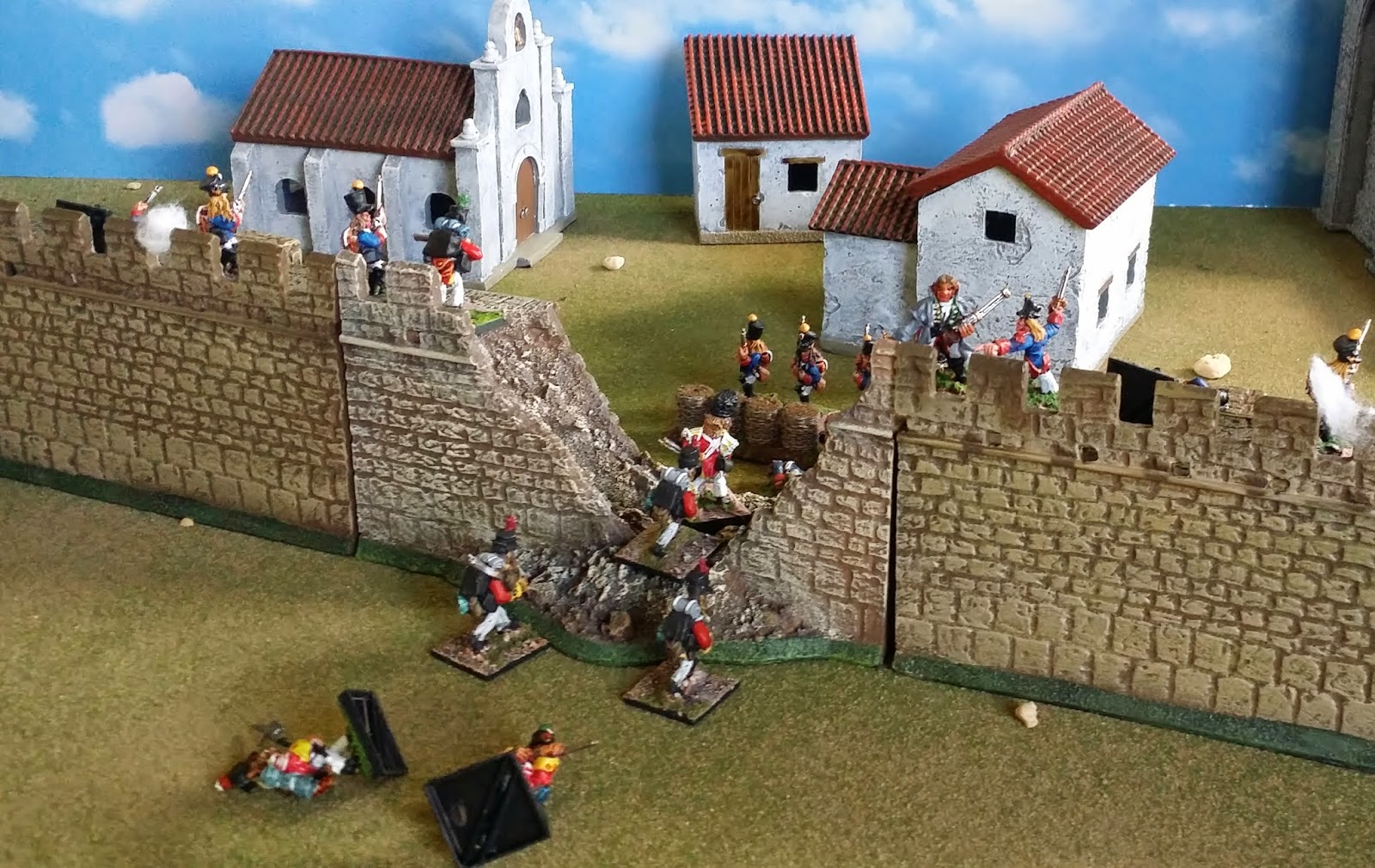 First man into the breach was grenadier Simpkin of the South Mordor Regiment.

He was immediately shot and killed by a squad of Frenchmen waiting behind the retrenchment. 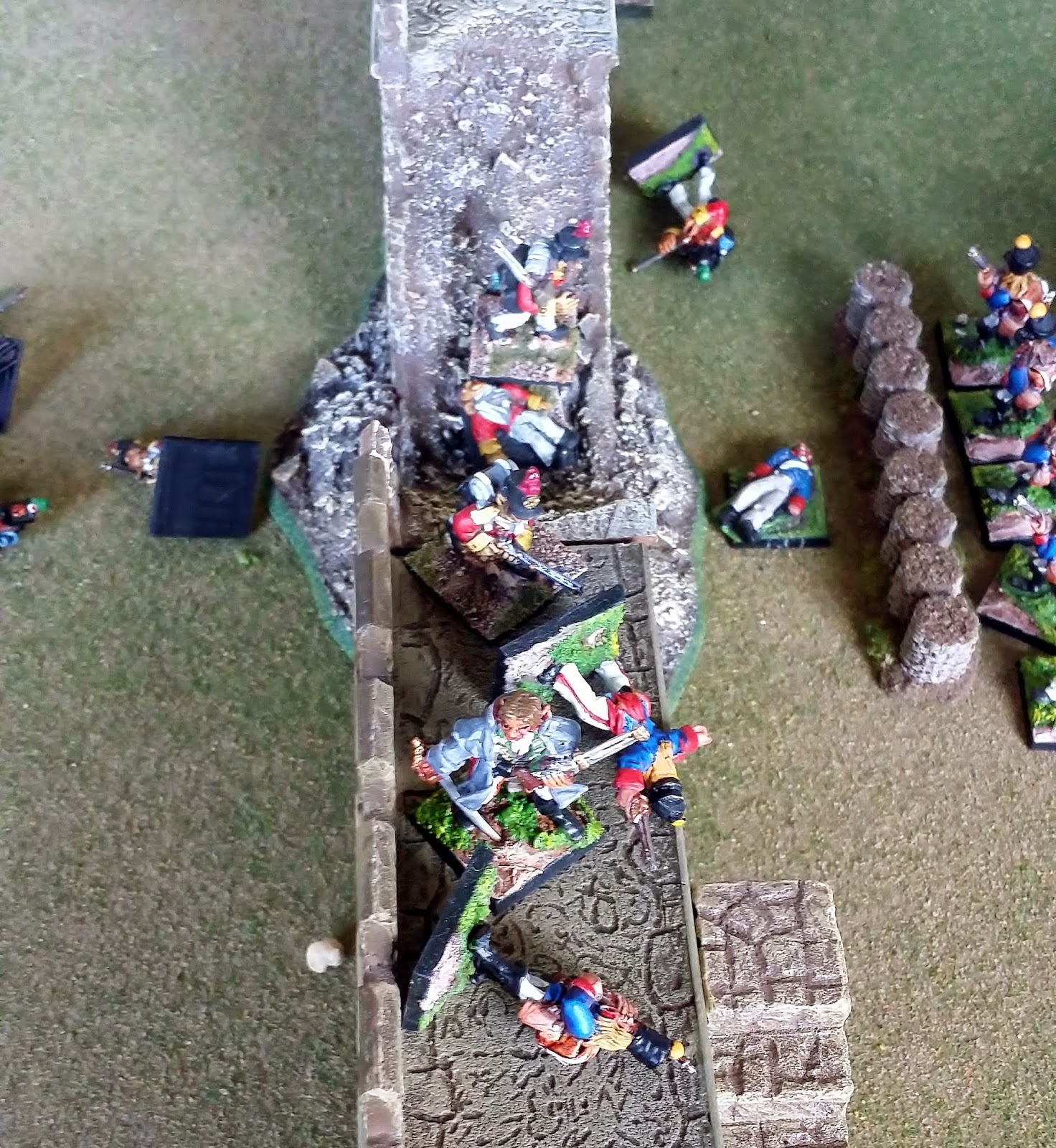 Disappointed at not having been first, Sharke redoubled his efforts, making his way up the wall to the parapet and killing a French officer in hand to hand combat.

The other side of the breach was tackled by a light infantryman who was not as lucky. His broken body tumbled to the ground below.

Of the ten men in the party only three reached the top of the wall.

It was enough to secure a lodgement for follow on forces, so a good, if costly, result.

Still need to finish up some bits (that means writing), both for this and the regular assault scenario. Still the end is in sight!

Email ThisBlogThis!Share to TwitterShare to FacebookShare to Pinterest
Labels: 95th

Which side are you on?

As war in the Witchlands rages on, twilight is falling.

A war of the Heart.


Daughter of one of Emperor Mordred's liaison officers, Isabella has been living amongst the werewolves of Diberia for some months.

There she struck up a friendship with werewolf  heartthrob Jakub.

Jakub is an up and coming werewolf leader held in some regard by both General Hoofiuszko as well as the Emproer himself.

Jakub has lost his heart to young Belladonna.

But life (and death) is not so straight forward for the wan Isabella.

The wee girl was unceremoniously brought before the raiders' leader, Captain  Edvarda Sverkayushchey-Kozhi-Bletski  aka Kulinkov.

When his undead eyes met hers for the first time she was lost.

The feeling was apparently mutual as the sparkly vampyre soon spoke to her of his feelings.

No ordinary Vampyre was Kulinkov. He loathed his undeath as well as the hierarchy that had spawned it.

Kulinkov vowed to Isabella that one day he would be free of the Dark Czar's grip and when that day came he would fight for the Emperor.

With that Edvarda made sure that Isabella was safely returned to her camp.

Ever since their first encounter Isabella has been increasingly dreaming about a "life" of  undeath, in which she spends eternity with the dreamy Edvarda.

Truth be told, while by no means wishing the curse of undeath on his beloved, Edvarada has been making plans involving Isabella as well.

Meanwhile Jakub has had visions of his own.

Note: Edvarda was first introduced in the  scenario "General Buster and the Cossacks of Doom", published as part of the Orcs in the Webbe Advent Calendar 2013, and rules for his use in games of Flintloque may be found at the above link.

It had always been my intention to follow this up with a prequel mini-campaign featuring a series of skirmishes between Edvarda's undead and Jakub's werewolves. The outcome of the thing will be decided by the games although we must presume that Edvarda "lives" in order to turn coat and take part in Colonel Buster's expedition.

Only recently did I manage to finish up Jakub, a werewolf from West Wind's Gothic Horror line IIRC. I also took some time to rework Edvarda in a foot and mounted version including some repainting and use of gloss varnish on his skin to give that sparkly effect that drives the ladies wild.

The first encounter is already planned with the Undead raiding a convoy defended by the werewolves and elves although at this point I am not sure when it will make it onto the table.

Hope you enjoyed the post and thanks for stopping by!
Posted by M. C. Monkey-Dew at 1:31 PM 2 comments: 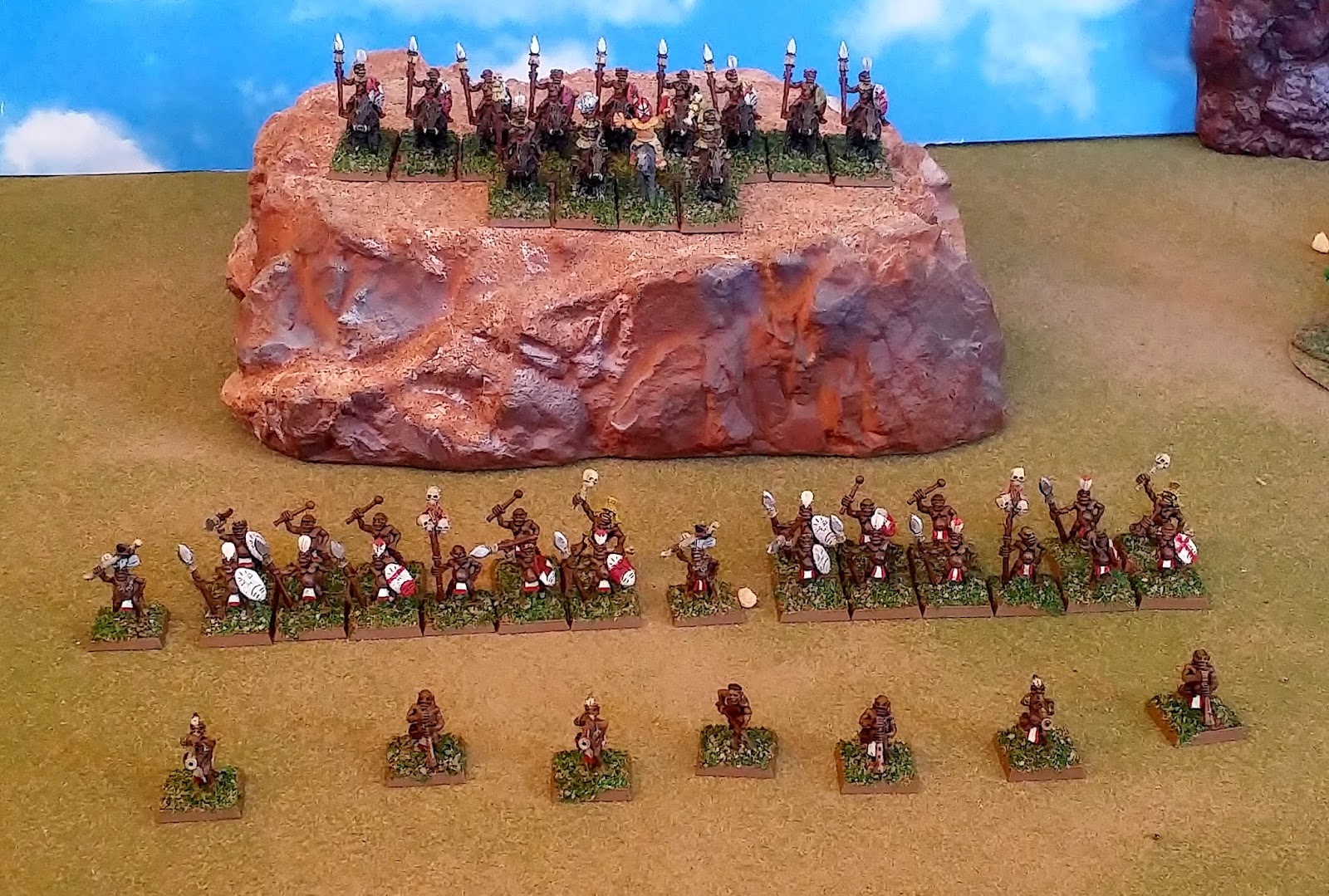 At the base of the Skeevooza Massif live the Shongodtha Shongod tribe. In the past these poor souls have been traditional prey for the Othari slaving expeditions that come south from the deserts or west from the coast of Afri.

All of that is about to change. 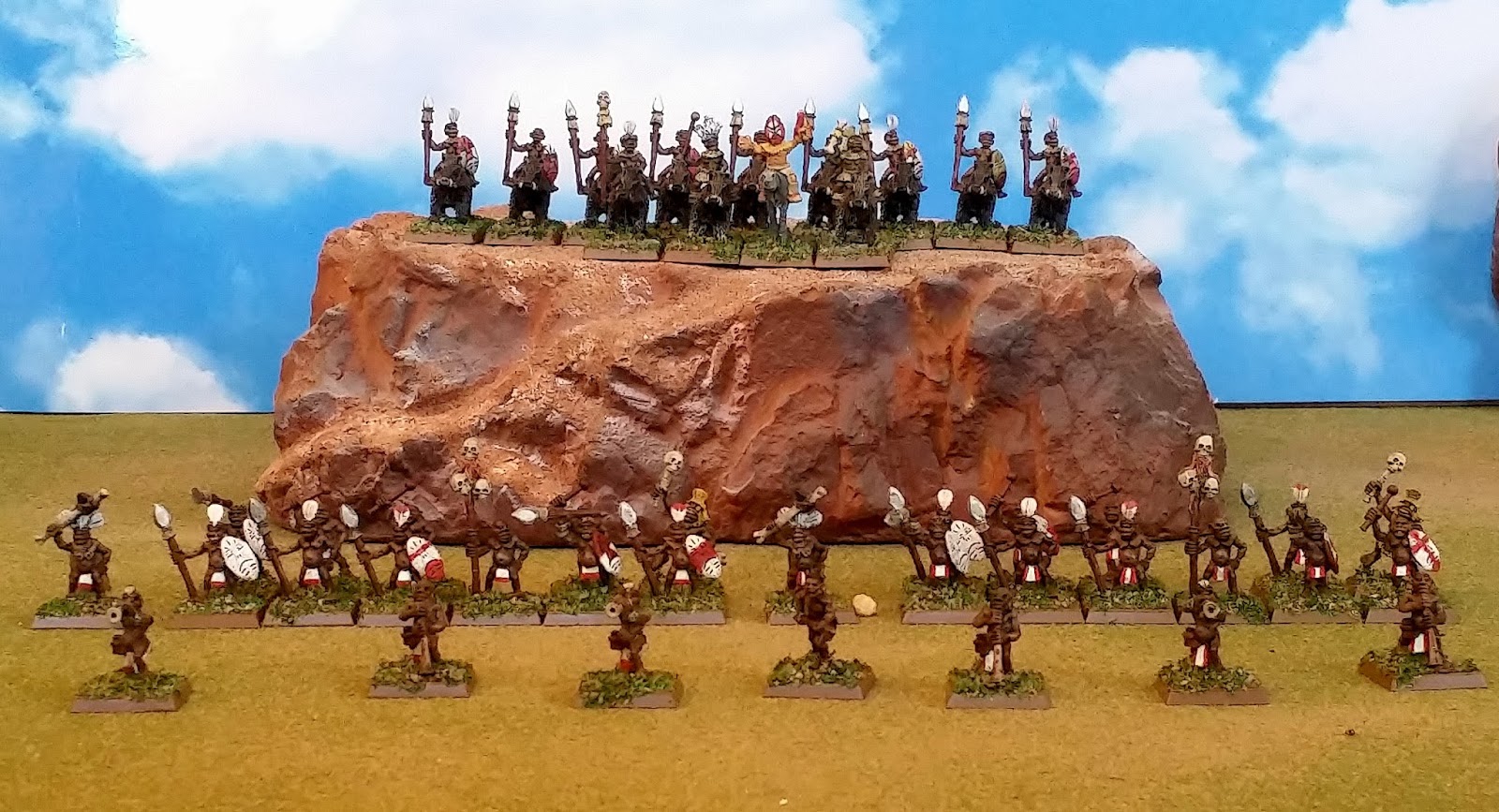 No one knows where he came from or even his real name. Those who have heard him speak and lived to tell of it say his words hint at a Guinalean origin. The most prevalent rumour is that he was the soul survivor of a shipwreck on the treacherous Carrot Coast. One day he simply marched into the Shongodtha Shongod village, with his batman, Sergeant Friday and just...took charge.

Bwana Lucky, as he styles himself, reorganized the tribal levy along Uropean Lines
and named his small army The Shongodtha Patrol.

The patrol consists of two battalions of infantry and one regiment of cavalry.

It is often the case that the light companies are detached and sent out as scouts under the command of Sergeant Friday.

The grenadier companies are kept with their parent battalion unless some particularly important  task calls for their combination into a small battalion of their own.

Bwana Lucky can be found leading any part of the patrol, as often as not in the thick of battle. It is said that he carries powerful talismans that prevent his suffering any wound by enemy hands.

In the time since Bwana Lucky has come on the scene, many tales of desperate jungle ambuscades and daring savannah raids tell of the doom of many an Othari slaver.

There are even tales of  the growing wealth of the Shongodtha Shongod.

Such tales may be their undoing.

Notes: It all started with a  much appreciated offer of help. As 2012 was winding down I was casting about for mounted Halfling figures to use in Black Powder Fantasy battles and skirmishes. Elton Waters find fellow and splendid sculptor that he is, offered to craft two x ten figure units based on the Alternative Armies mounted halfling codes.

The result of his labors may be seen by right clicking here.

To my delight Elton had included a 21st figure; a halfling in ragged trousers wearing an African mask, holding aloft a bone fetish. I was informed that this unfortunate had been inducted into the Royal Navy and shipwrecked in Afri.

On first sight I knew just which figures to us as his tribe. Kallistra make a series of pygmies similar to those offered by Games Workshop as opponents for their  Snotlings back in the day.

With my glacial painting speed it only took until now to get the tribe table ready. It's not so much my speed, this lot only took about a week to paint with extra time before for priming and after for basing, rather its the large time lapses between my summoning of the energy and will to actually paint that slows things down considerably.

In any event, I do hope you enjoy the figures and look forward to seeing them in action in the future.