USE ME 15mm High Fantasy AAR Strangers in a Strange Land

The Ultra Simple Engine for Miniature Engagements (USE ME) is a series of low cost, low complexity sets of miniatures rules available from 15mm.co.uk here.

Today I played a game using the High Fantasy entry in the line-up. Here is the blurb from the website:

Ultra Simple Engine for Miniature Engagements - 15mm Fantasy
USE ME means 'Ultra Simple Engine for Miniature Engagements' and this system delivers just that. Tactically challenging, easy to learn and for any age of wargamer interested in ANY fantasy setting.
From skirmish to full battles, games last from five minutes to an hour or two for the largest battles. Play in your lunch break or in the evening when the idea of a really complex system with a long set up time really does not appeal. Pick up any of you Fantasy miniatures and get playing in minutes. This complete rules system is printed in A6 format which is a booklet which will fit in your pocket (110mm by 180mm) making it truly portable as well as fantastic value for your money. USE ME is just that...its for you!

Basically you build an army from points, set up the terrain, lay down your troops, and fight to the last man/orc/elf/whatsit, and see who will recover in time for the next set to.. I'll address each point a bit as the after action report unfolds.


Being noticeably short in the15mm fantasy figure department I knew going in that some funky army building would be going on up in here.

I decided to use Rebel Minis faboo Scourge as one side. These masters of heavy metal mayhem have crash landed on Fantasy Planet X, and are just trying to say alive. Actually I don't know if they actually are "alive", so lets just say "functional".

USE ME gives you the option of statting up a figure as infantry, cavalry, creature, monster, titan, personality or artillery.

I rather cleverly decided these would be infantry.

That having been done you need to assign an Elan (think initiative rating), move rate armor, weapons and any special characteristics to your figures.

One would be Elan 6, the others Elan 5. They were all armored, armed with Long Bows, Eagle Eyed, and Iron Willed. Long bows as there are no gunpowder  let alone laser weapons in the rules, gave them a long range of 36", and an optimum range of 18". Eagle Eyed gave them a +1 to hit, and Iron Willed allowed them to shrug off some damage. Not quite up to Cyberman capacities but then they aren't so why should they be?

This gave me a force of 148 points so I decided to build up to 150 points of opposition.

To oppose the Scourge I pressed what few fantasy figures I do have into service: 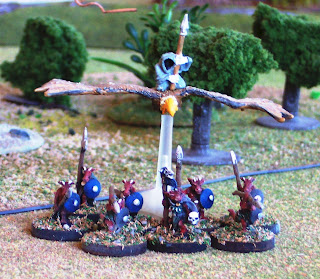 I wanted this force to have a hard hitting leader, a shaman, and however many goons to bring it up to points allowed.

The boss would be a flying Monster, Elan 5, Move 10". Even though the figure has a distinct rider and creature they would be considered as one entity in the rules (31 points).

The shaman was Elan 4, Move 4", and a practitioner of yellow or "Speed" magic (48 points). There are four schools of magic, War, Missile, Speed, and Alteration, each with four spells. Of the four spells it seems that three are useful generally while the fourth is only useful in conjunction with formations. more on which after the AAR.

The remaining points went to Elan 3, Move 4", kobolds armed with spear and shield (10 points each), of which I took 7. That brought the force to 149 points.

As a side note I generally loathe building armies and much prefer pre-generated characters and troop types, doled out according to scenario creation rules. That out of the way for folks who like this sort of thing, USE ME High Fantasy, certainly gives you the tools to obsess over point costs as much as you like.

Setting up the Terrain
On this aspect of play the rules remain silent, other than to enjoin you to set up terrain in a manner suited to the scenario you have decided upon or to contact the publisher for some basic scenario types.

Given the brevity of, mission statement of, and number of examples included in, the rules for the price being asked, fair enough!


I simply used the terrain I had still set up from Sharke's Halfling . The story for this fight was that the Scourge the were camped out on a hill, and the kobolds were attracted by the lights of their camp, a la, "Fellowship of the Ring" of all things. To this end I added a tiered hill in the center of the playing area and set the Scourge upon the lowest tier.

The kobolds started in  wood, just about 18" from the hill. 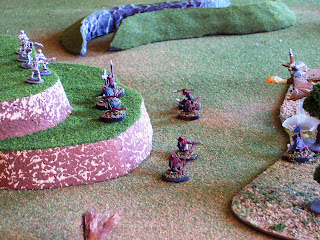 Models activate in Elan order with a dice roll determining the order among opposing forces of the same Elan. The Scourge began to fallback up the hill side as they had no targets at start. Soon the kobolds erupted from the wood with the shaman using his wiles to speed some warriors on even faster. The monster held back, trusting to its superior speed to allow the warriors to soak up any fire the Scourge managed to lay down. 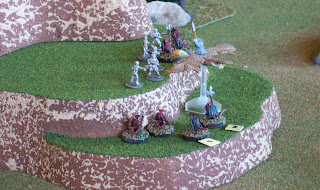 Firing is resolved by throwing one d6 to see if a hit occurs and a pair of opposed d6 to see if a target that has been hit has suffered any damage. Damage consists of being Winged, Struck, or Killed in worsening order. Both the to hit roll, and the damage rolls are subject to modifiers for such things as range, armor, type of weapon hitting type of target and so on.

Here the kobolds were consistently lucky often being able to shrug off hits by virtue of better dice rolling. The cunning plan worked and the monster got suck in without having taken any fire...only to be wounded in the first round of melee.

Melee combat is like missile combat without the to hit roll. Anyone choosing a melee action automatically hits his opponent and if he does not kill them, also suffers a return attack.

The Scourge gamely fell back, firing all the time until their backs were against the wall. 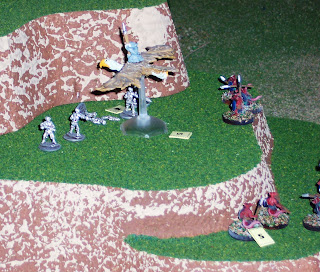 The monster pressed the assault and killed the Scourge leader. The rest of the kobolds joined the scrum. 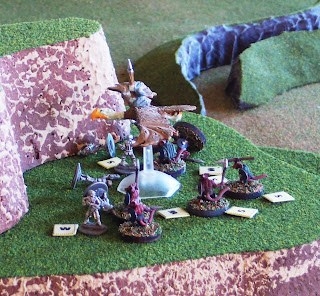 Spear thrusts and blaster fire continued and more and more figures suffered wounds. The Scourge dropped one by one. 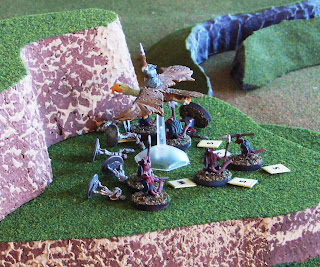 Finally there were only kobolds standing.


In keeping with the Old Skool feel of the rules, there are no morale rules. Your figures fight and die like so many Chessmen, without any concern for their own safety.

After the Fight
The battle ended with all five Scourge slain.
The kobolds had suffered:

The rules allow for dice rolls to see if figures recover after the fight. Even "killed" is not a career ender as such figures might just have been severely wounded and able to crawl back to camp later.


Now even though the Scourge were just as entitled to after the fight recovery as the kobolds, I  only rolled for the latter.

So there it is. Fantasy Planet X has survived the alien incursion (deliberate or not), and will keep up with all their fantasy world high jinks for the foreseeable future.

The game was a lot of fun and the rules do what they say on the tin. Here are the bits I didn't get to use:

Formations:  Formations have been mentioned in passing above. As with my own Warrior Heroes, Armies and Adventures, USE ME High Fantasy, is both a skirmish and mass battle game. In USE ME this is catered to by allowing infantry and/or cavalry figures to be grouped in multiples of 3 to form "formations". Figures with in a formation have many advantages over those fighting as individuals and indeed except in the instance of "Personalities", individual infantry and cavalry figures offer no threat to formations at all.


I love this aspect of the rules but then I would. I wish every set of  rules would provide for both skirmish and formation combat and allow for seamless switching between the two. Save quite a bit of flipping through multiple books, and paying for repeated information.


Personalities: You will have already read of the shaman used in the AAR above. In terms of the rules the shaman was a "Powerful Wizard" one of four personalities. The other three are "Cunning General" , a "Mighty Hero", and a "Blessed Cleric". Each of these types brings something different to the game. The General allows your forces more actions. the Hero is  a fighting machine and can increase the fighting ability of some nearby figures, and the Cleric allows for some healing of injured figures.


I only used the wizard in the game above. I could have used the Might Hero instead of the Monster but the two could not be combined in one figure and I didn't feel like fielding both types.


In sum then USE ME High Fantasy gave a good simple game that is easy to pick up and play. The rule book is full of examples supporting the concepts introduced. In order to fit all of this info in the space provided the text is a bit tiny, and so perhaps a game for younger eyes than mine. However with the availability of pdf versions, the print size need be no obstacle.

If you like statting out your figures, list building, and a combat system that gives you full control over your forces the USE ME provides a very enjoyable game at a very reasonable price.
Posted by M. C. Monkey-Dew at 4:40 PM

Email ThisBlogThis!Share to TwitterShare to FacebookShare to Pinterest
Labels: USE ME