From his position on the ridge Giglamps could see Laringo Spasm deploying his Rifles across the valley floor.  The Rifleorcs deployed with their usual alacrity with the strange gait of their kind.

On the left some skirmishing broke out along the wood line. That much was to be expected. The Burrovians were hardly likely to have left the orcs unobserved. 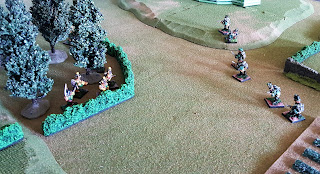 In the centre Spasm's orcs were just about at the foot of Hassenhoff Ridge when the drums sounded. 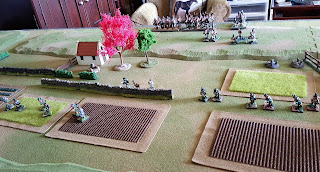 Captain Merciless of the RHA turned to Giggers. "Sounds like one of Stephonsorc's demmed engines, if ya' ask me!". Giglamps merely smiled politely to himself.

Soon they could be seen cresting the ridge, Ears first, then shakos, by Sentinnel there were a lot of the fellahs!

Six hundred rabbits at least. A full battalion. And to hold them only three companies of Rifles, two squadrons of the Sewon and Soforths, and Merciless' section of guns. 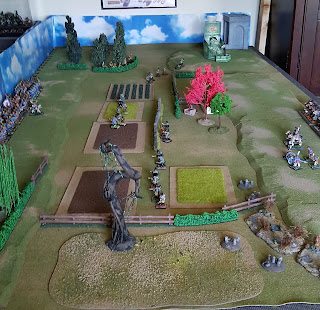 And so it begins.

It's been too long since I've put pen to paper on a set of rules.

While I have been re-working "Warrior Heroes: Armies and Adventures" over the last few months, it is time to take a break from the world of Sword and Sorcery and plunge back into the smoke of the black powder battlefield.

For a number of years I have been trying out various systems for a "company level" game set in the world of Valon. "Flintloque" is an excellent game for up to twenty or so figures per player, and "Slaughterloo" an excellent game for recreating division sized black powder actions. However I still think there is a niche between the two that can be usefully filled.

In the past I have tried simply streamlining "Flintloque". It gives a good game but there is a better way.

Also I have played these games using rules I've written for Two Hour Wargames, and while these give a very good game, I want to develop something non-THW for this project,

Which brings me to the secret project which hopefully will not remain secret for too much longer. It is a variation of that system that I am now adapting to Valon.

To be clear this application is not official and entirely just because I think it will be fun to play.

More as it happens and thanks for stopping by!

UPDATE: It did happen, here .