Halflings on the Margins: My WFB 3rd Empire Army

Just finished the last of my GW halflings from the 80's-90's. They sat in their blisters for quite a few years before finally being painted and taking their place in the ranks of my Empire Army, but more on that later.

For now, here are the last seven. If any readers are interested in the first 23, here is a link to all of the Gorgon Halfling posts, which will also fill you in on their place on the Black Powder Fantasy battlefield. LINK

As in the past I tried to give each batch of halflings a theme. These chaps ended up being hard bitten halflings making do on the edges of civilization. These are the hollow halflings, the stuffed halflings, for whom a pint of Old Burleby's Bitter and a Mince Pie has lost all appeal.

Confronted with the savagery of life on the frontier, these chaps have either snapped, losing all touch with reality, or hardened themselves, doing unto goblins and other raiders what those raiders have done to them.

Below is the completed unit, thirty strong, with two missile weapons between them, three if you count the pie thrower!

In the center you can see the great hero, holding aloft his gory trophy, the head of a gorgon, that he either slew, or came upon already dead, depending on whose story you choose to believe.

He is flanked by the remains of the Weemangian Guard.

In succeeding ranks may be seen the witch hunters, Larry and his brothers Daryl, the Major, and all the other notables of the Moot. 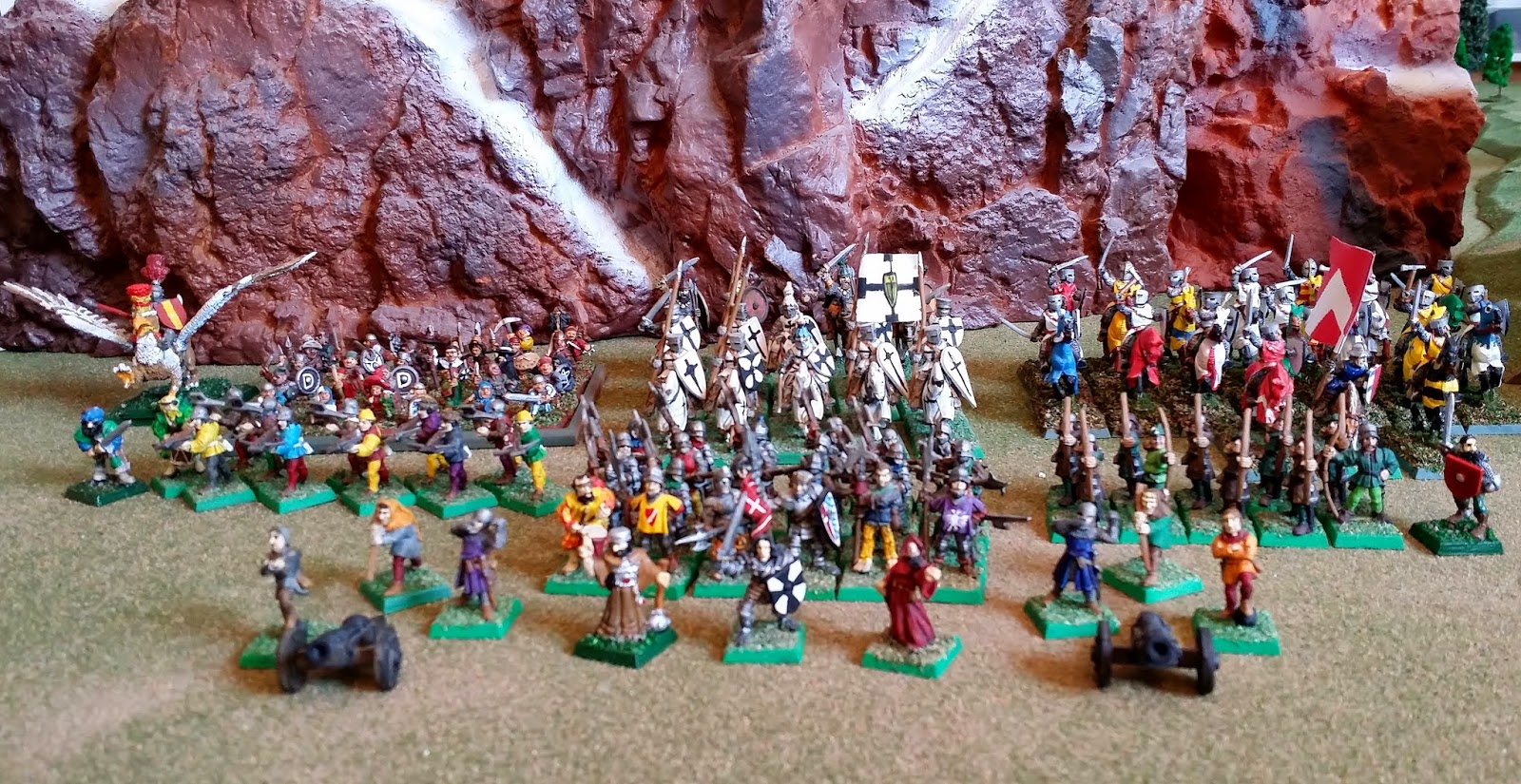 When Warhammer Armies (for 3rd edition. It was/is a wonderful hardbound set of army lists) was first released, Games Workshop had a fantastic sale. Really. They did that back then.

I was able to pick up two or three armies at a very reasonable price.  Picked up an Empire and Skaven army. Maybe one other. Not really sure at this remove.

Now, some 25+ years laters, some of the figures still await paint! 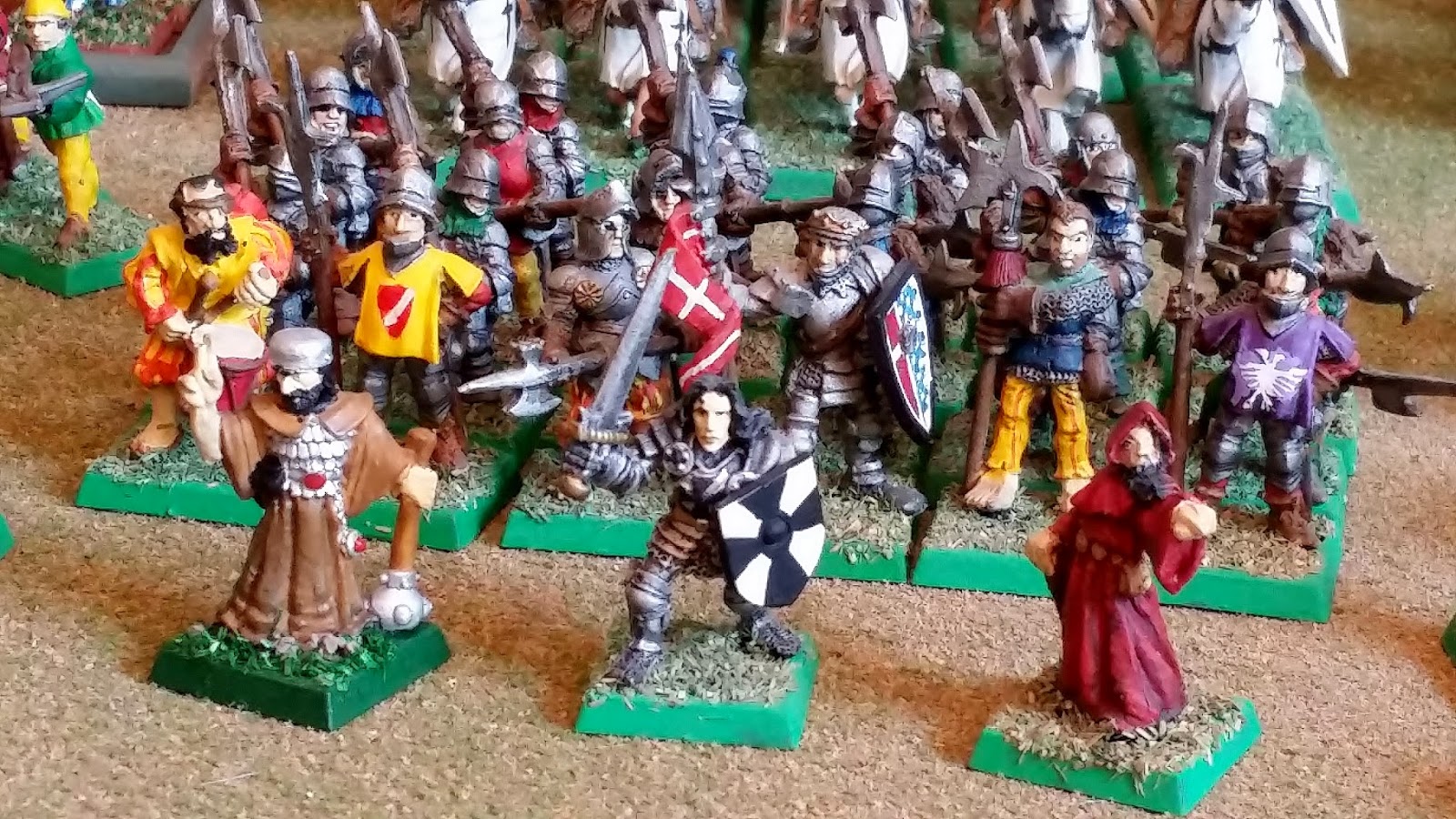 However pictured here are some that do not. 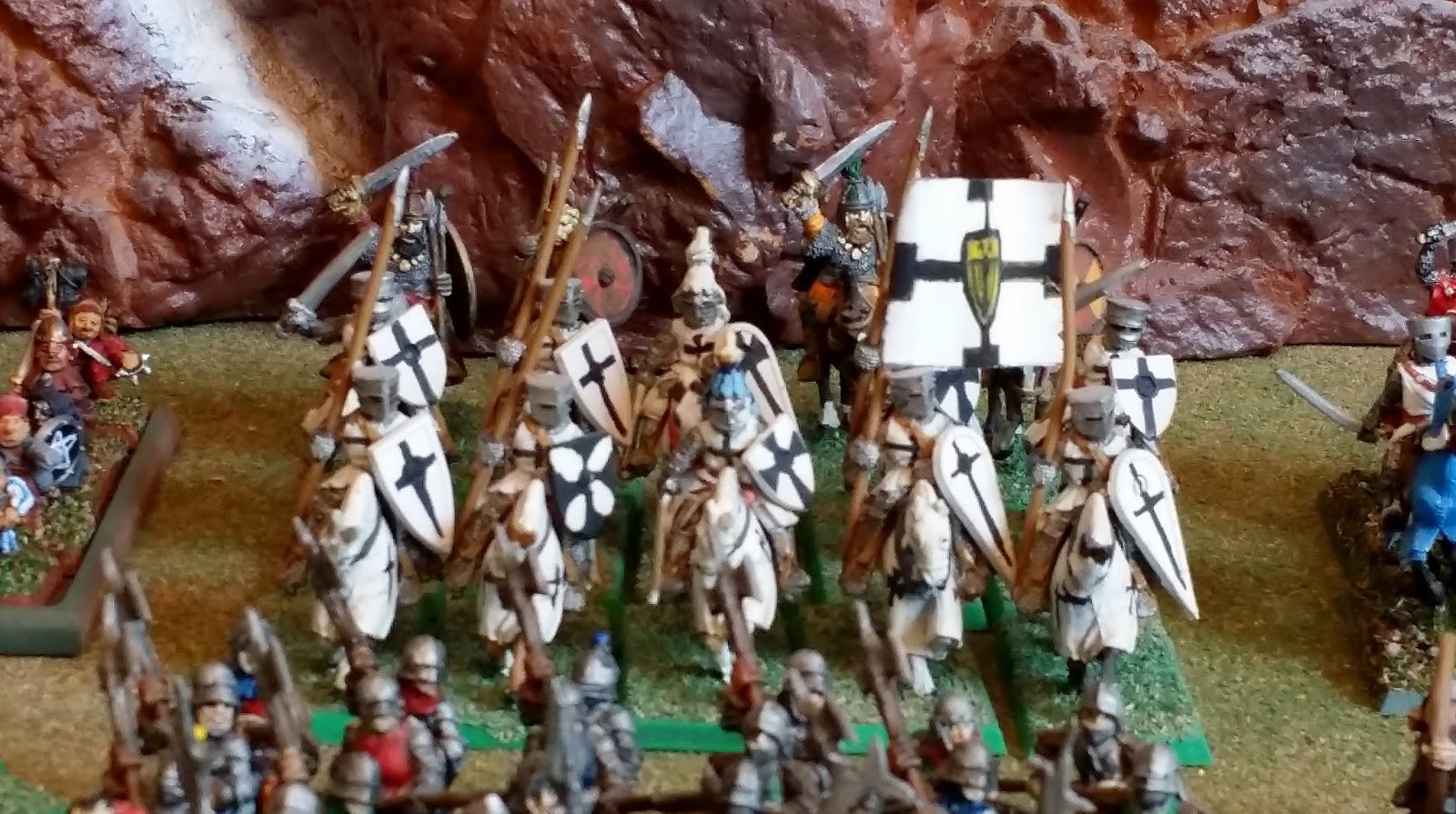 I painted most of these in the 80's-90's although I still like to pick out the odd figure or unit to add to the force now and then.

In fact the crossbowmen are of a slightly more recent vintage being the first figures to come with separate plastic crossbows. 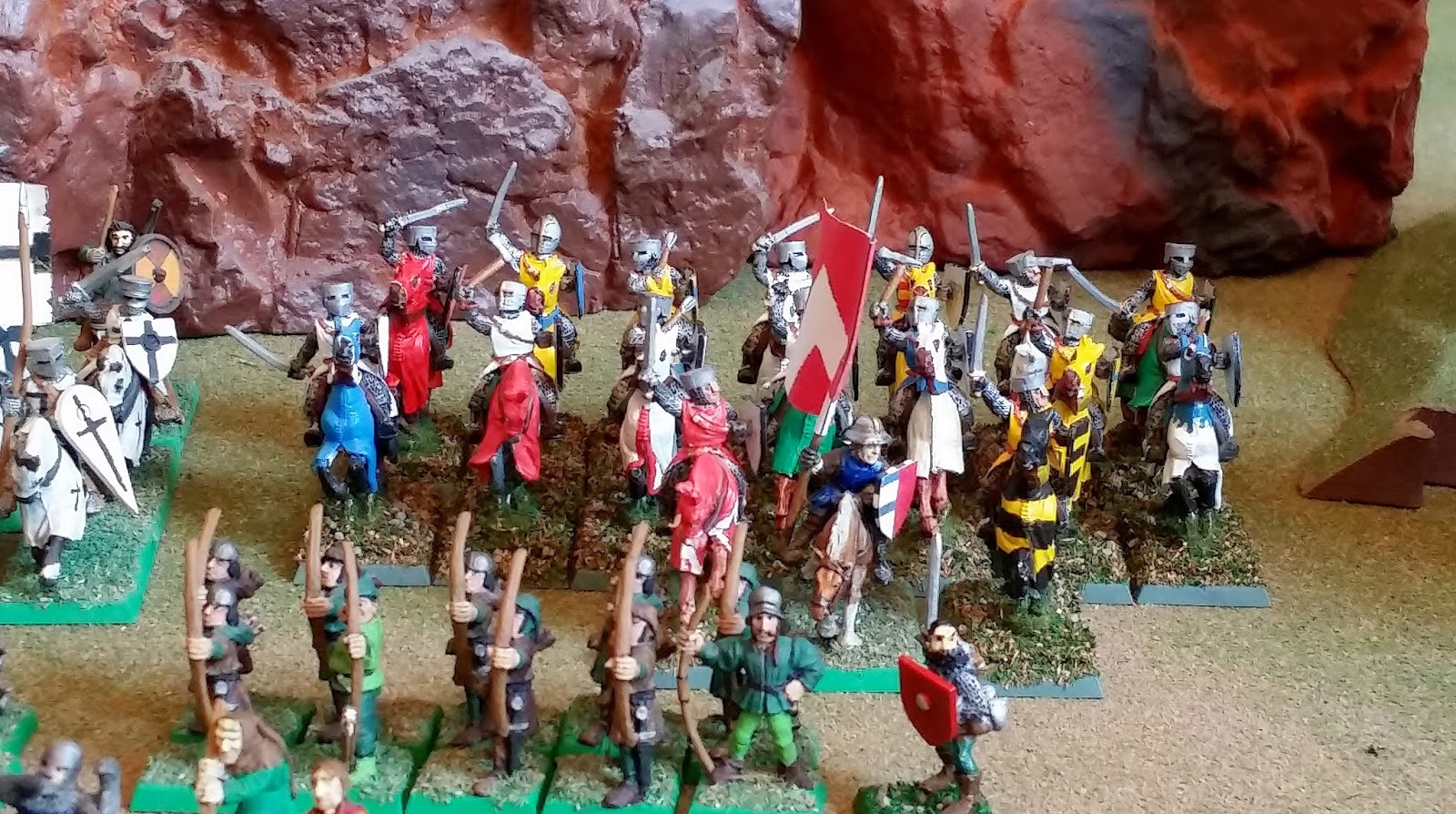 These knights are actually Old Glory figures that fit right in. I do have GW knights to add but while I have found their primed mounts, the riders remain in hiding. 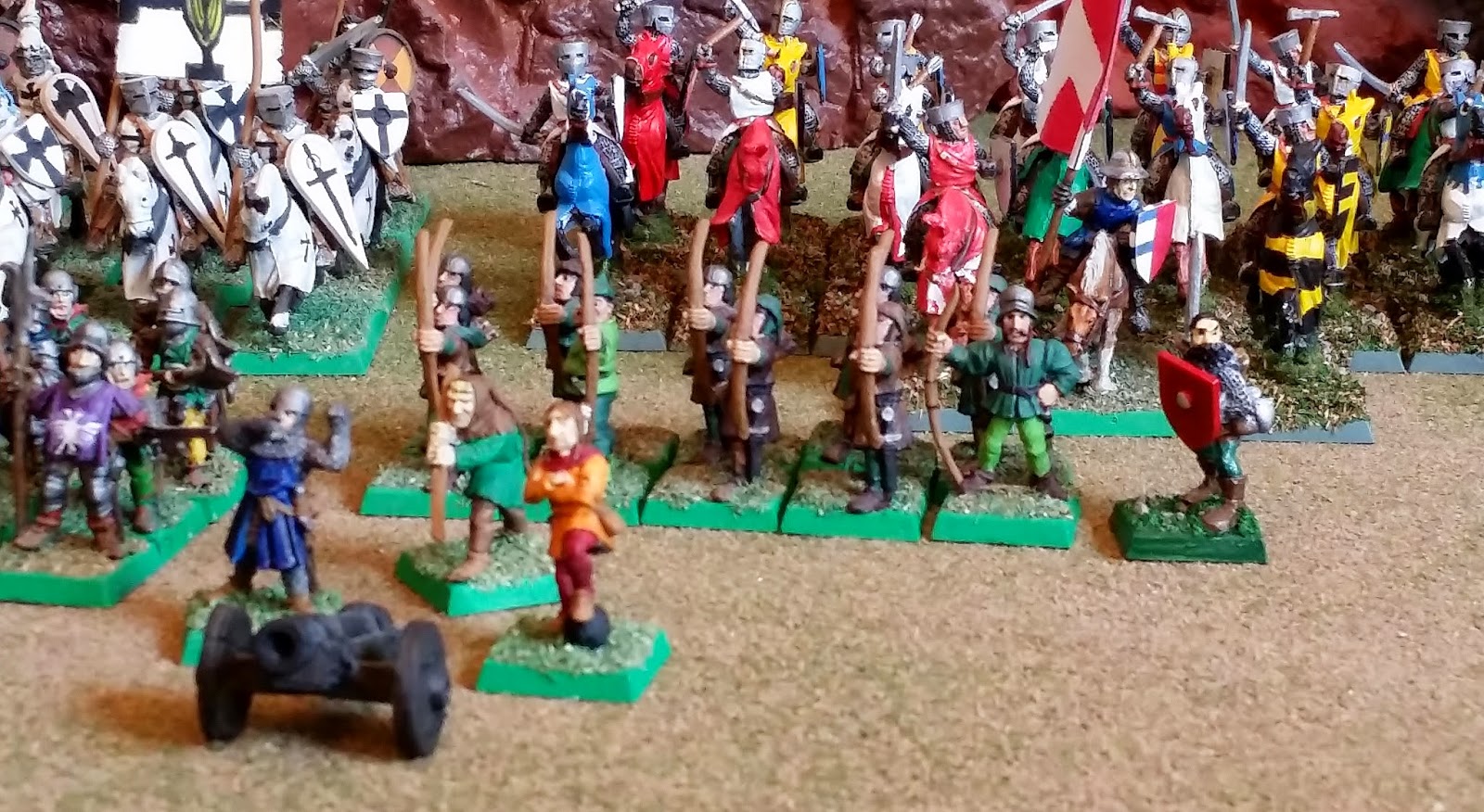 Can't say I really play WFB anymore but 2nd and 3rd edition remain solid games and good fun. These days I am more likely to play games set in the Warhammer World using rules of my own design. 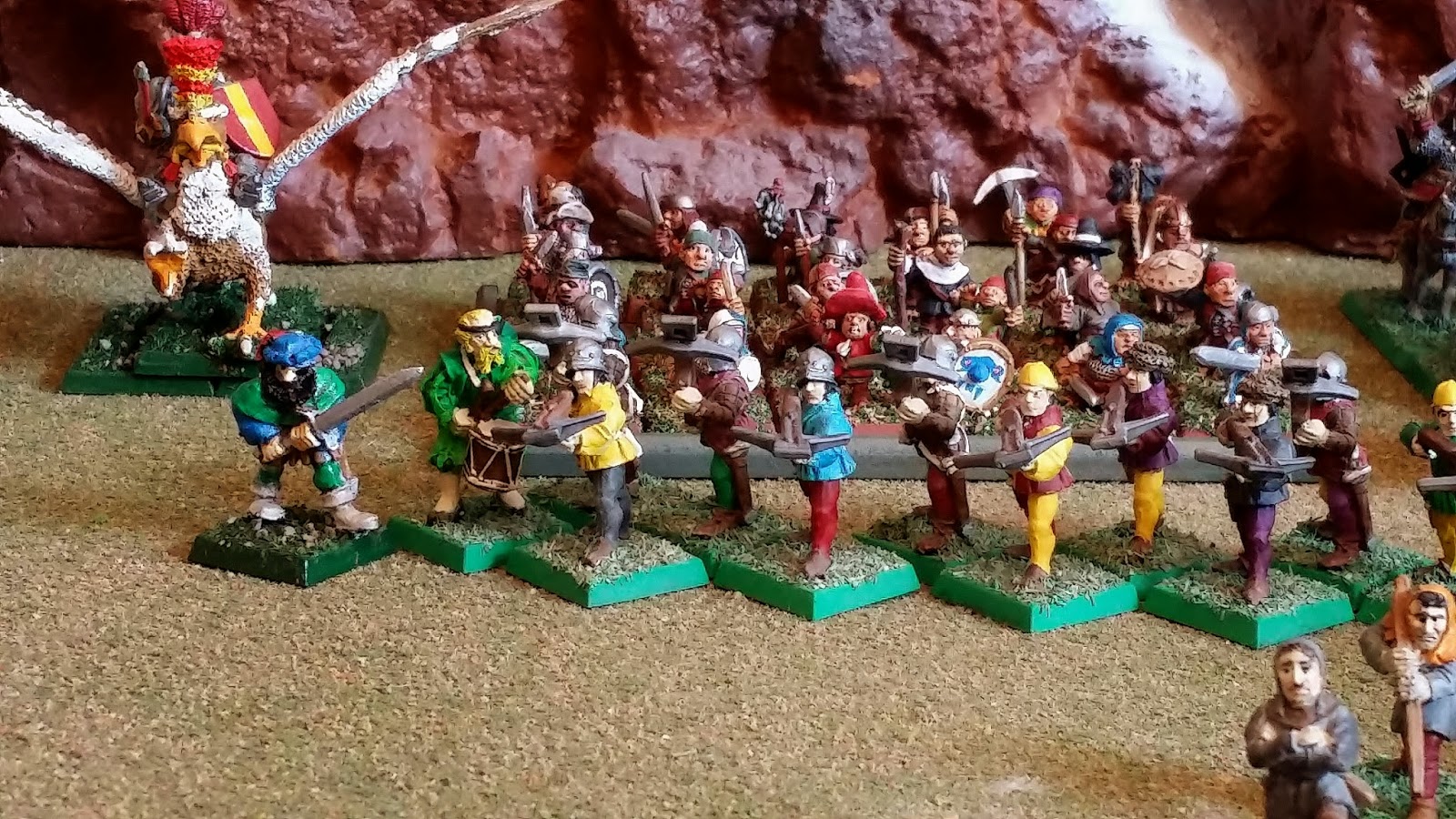 That having been said the important thing is how wonderful are the figures themselves. Full of character, each one looks like it could tell you a few stories.

BTW many of these figures are now available once again through Wargames Foundry!

Notes: All figures by Citadel Miniatures except for the mounted lay Knights. All figures shown painted by the author.

You may talk o' ginger beer
When you're quartered safe out 'ere,
An' you're sent to penny-fights an' Aldershot it;
But in Victory or Defeat,
You’ll do better with a sweet,
An' you'll lick the ‘airy feet of 'im that's got it. 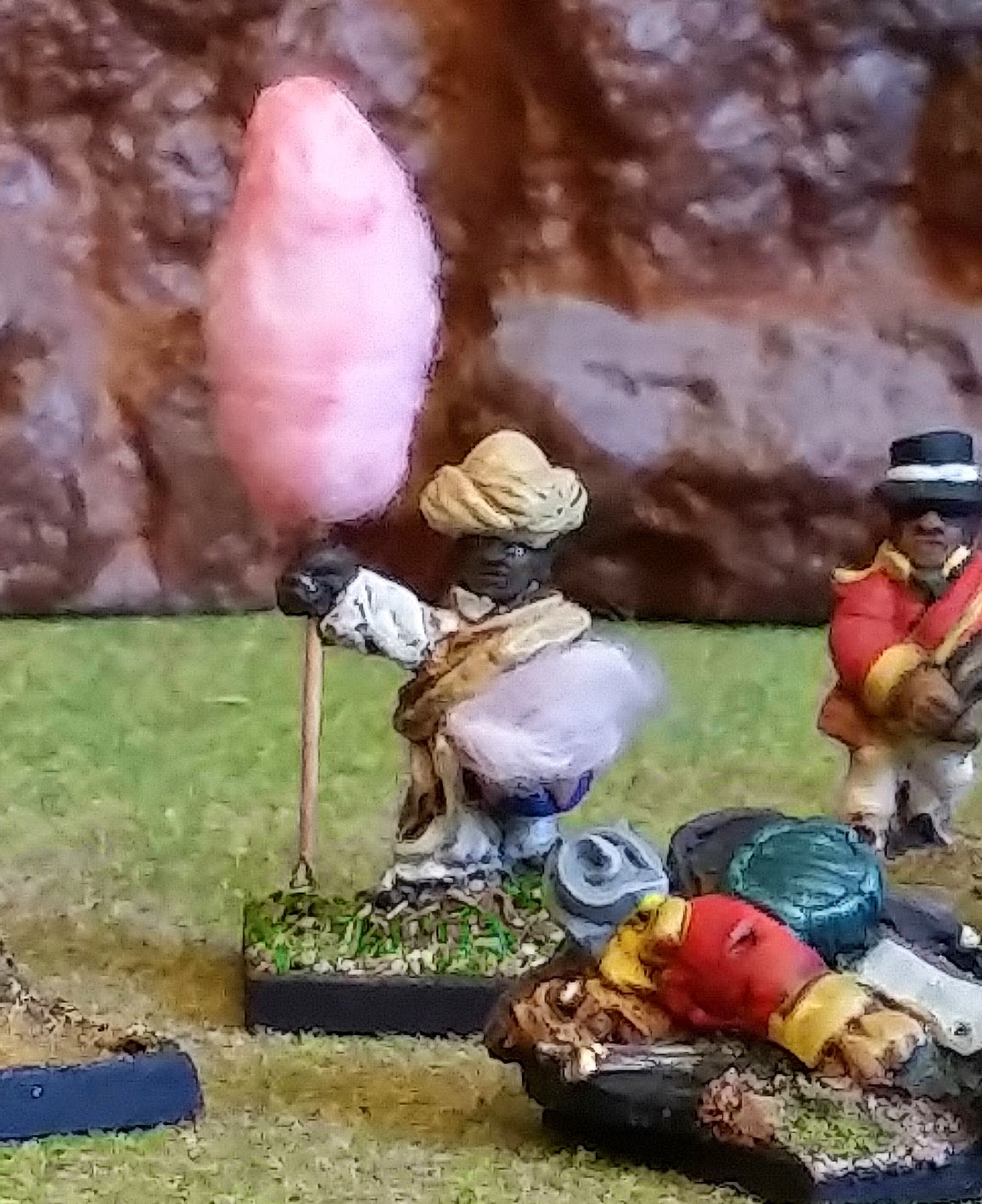 Now in Afri's sunny clime,
Where I used to spend my time
A-servin' of 'Is Majesty the Kyng,
Of all them ‘alfling crew
The finest bloke I knew
Was our regimental Bestie, Gamgee Din.

It has been said, and truly, that an army marches on its stomach.

Captain Giglamps of the Halflingland Rifles will tell anyone who will listen that a Halfling army fights on its stomach.

Similar to the Bhisti of India, the Bestie of Halfligland are both a tribe and an occupation.

In the distant past when the halfings received the Word from the Author, the Bestie also received the gift of candy floss. The creation of this great confection is a closely guarded secret among the members of this endogamous community.

The word "Bestie" itself derived from the Common Tongue "best friend":, a reference to the common ancestor of the Bestie, known only as "the Old Gaffer", who brought candy floss to the wounded Bandobras Took and fought off the goblins sure to have killed that worthy, in a time before the great halfling diaspora.

Today the Bestie accompany any military expedition mounted by the Halflings of Halflingland, in order to sustain the troops in their time of need.

As a result of Albion military expeditions in Halflingland, both candy floss and the Besties who serve have become a topic of ballads in the Salons of Londinium.

Gamgee Din is one such Bestie of whom we shall see more in upcoming episodes.
Posted by M. C. Monkey-Dew at 6:24 PM 6 comments:

Having sent 95th (working title Baker Rifle) off to the publisher, it is time to have some fun and play some games.

The following is the first in a campaign arc I've been working on for sometime. The game takes place in Halflingland, and uses the Brawl encounter from 95th.

Sergeants Machutney, Quatar, and Balifine are, as usual, visiting the canteen. An altercation has broken out between our heroes and members of a Joccian battalion stationed in the area. 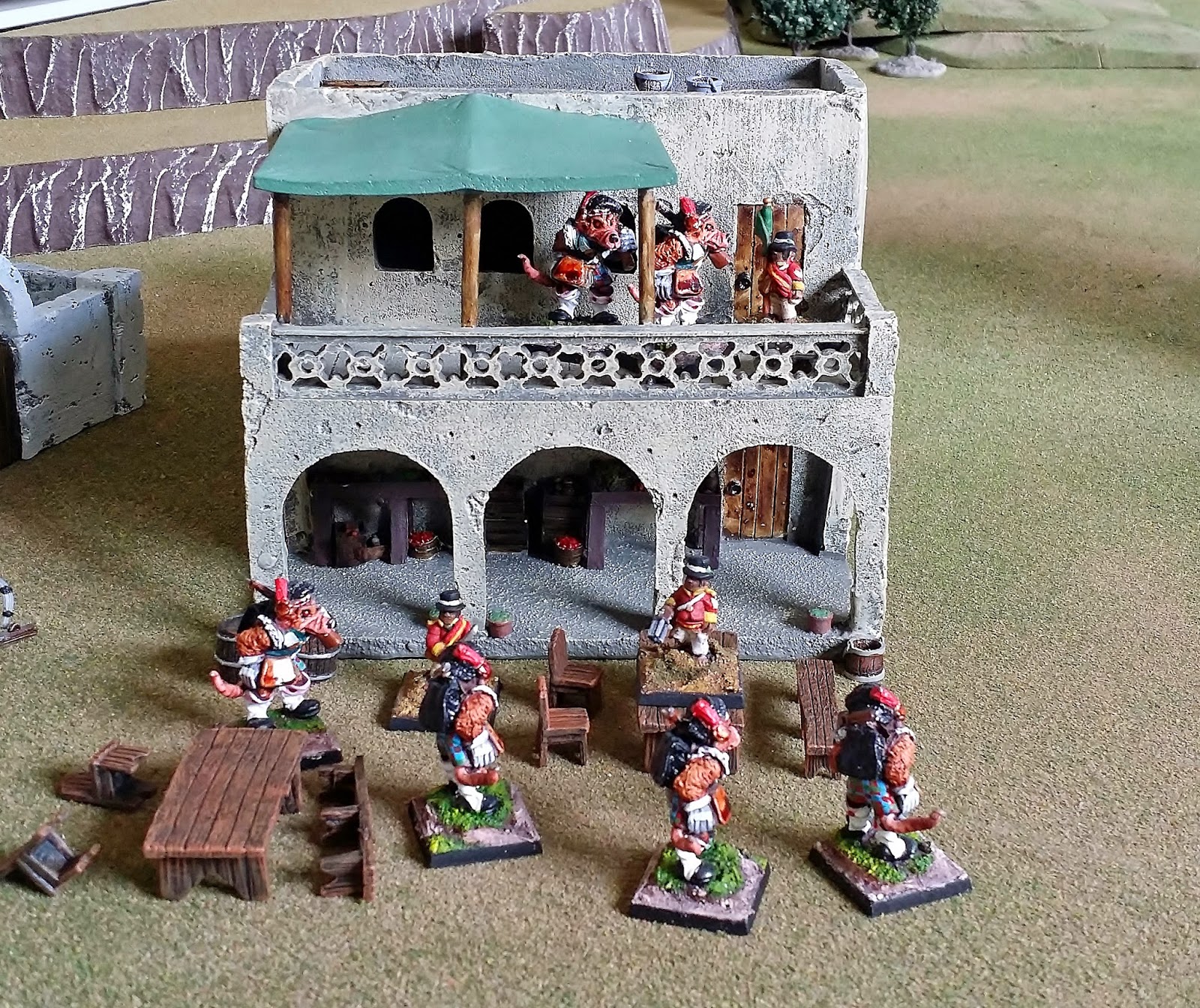 Some say the Joccians called Balifine's parentage into question.
Other say Machutney made an ill advised comment regarding kilts.
However we know it all has to do with the gullible Quatar having purchased a treasure map off of one of the rats. Machuntey rightly feared his friend had been swindled and tried to force the rats to take their map back.

Initially each halfling squared off against two Joccians. The halflings are all Rep 5, while the Joccians have two Rep 5 and four Rep 4 figures. 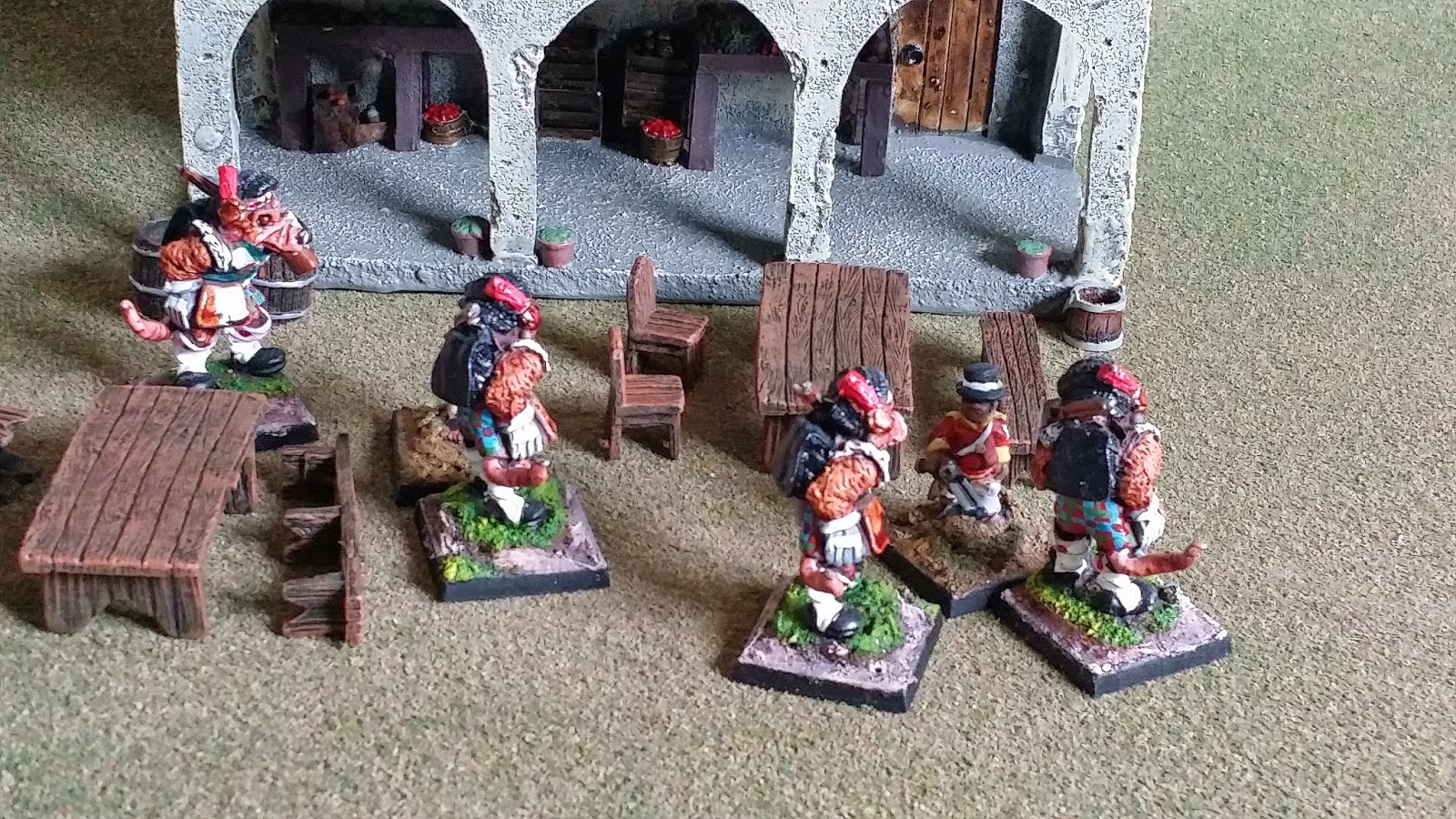 The Sergeants won the first initiative and they each charged the toughest looking rat of the two facing them. 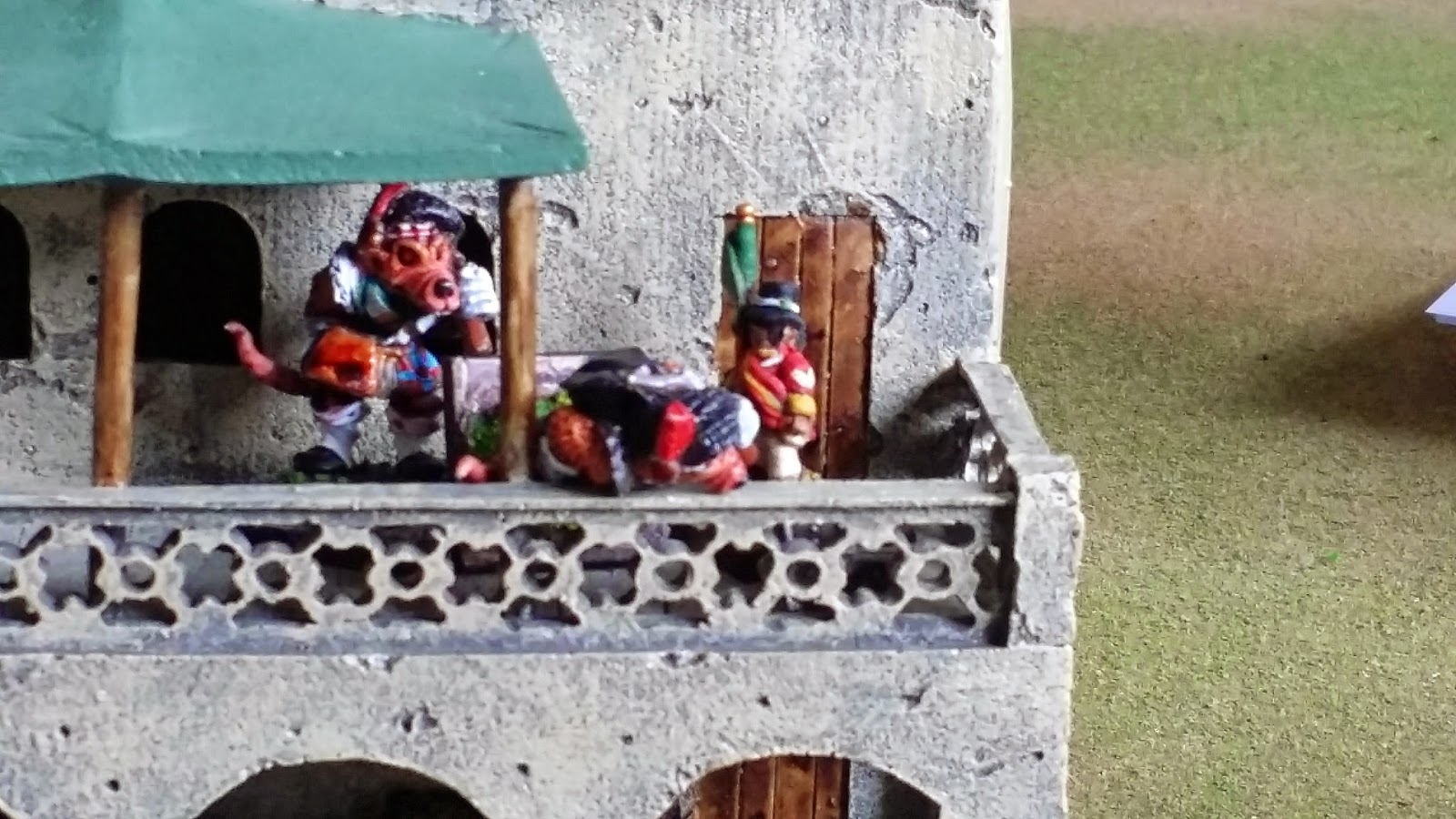 Quatar bull charged his rat and sent him flying over the balustrade. 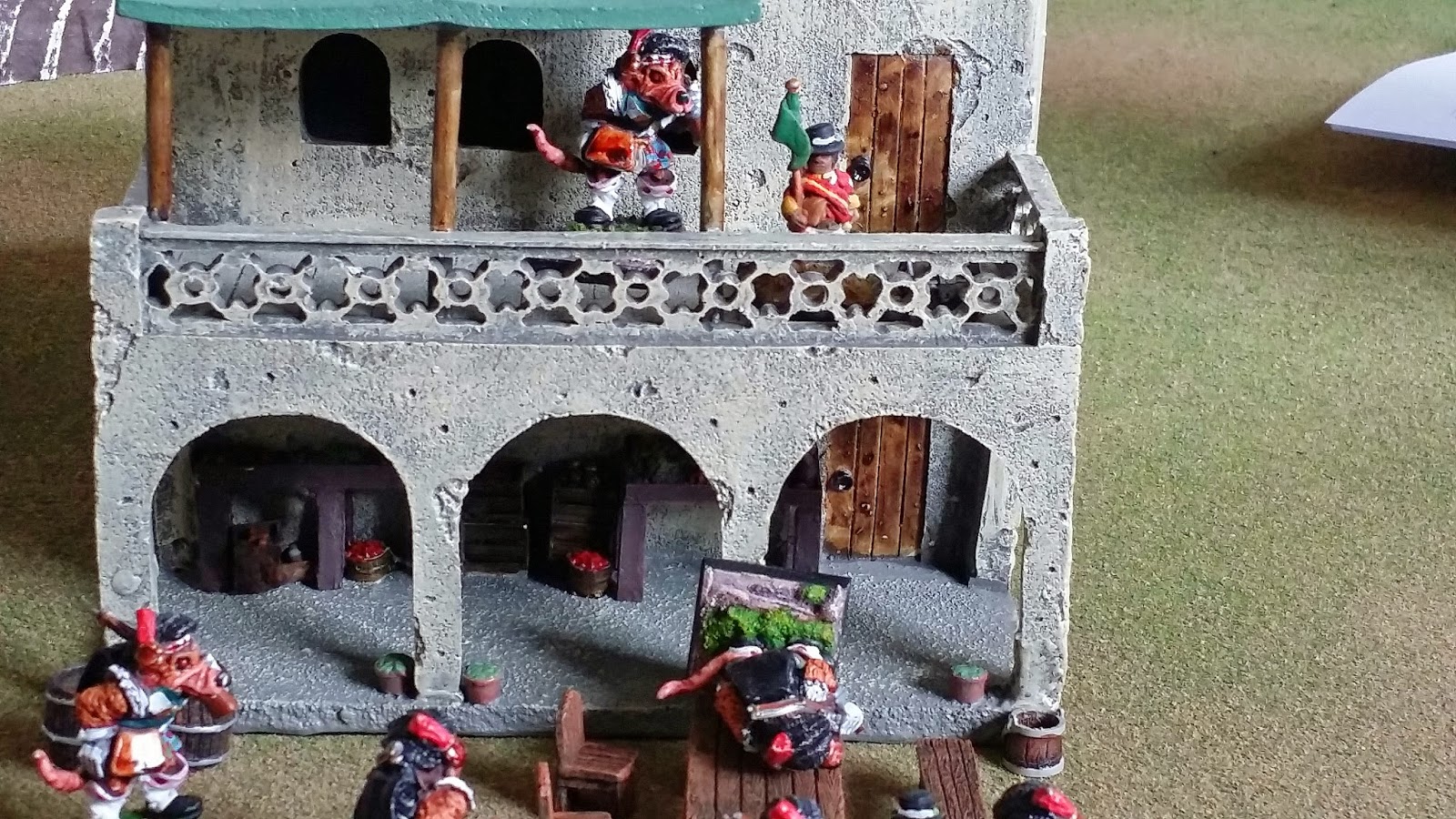 The unfortunate Joccian landing with thump on the table below. 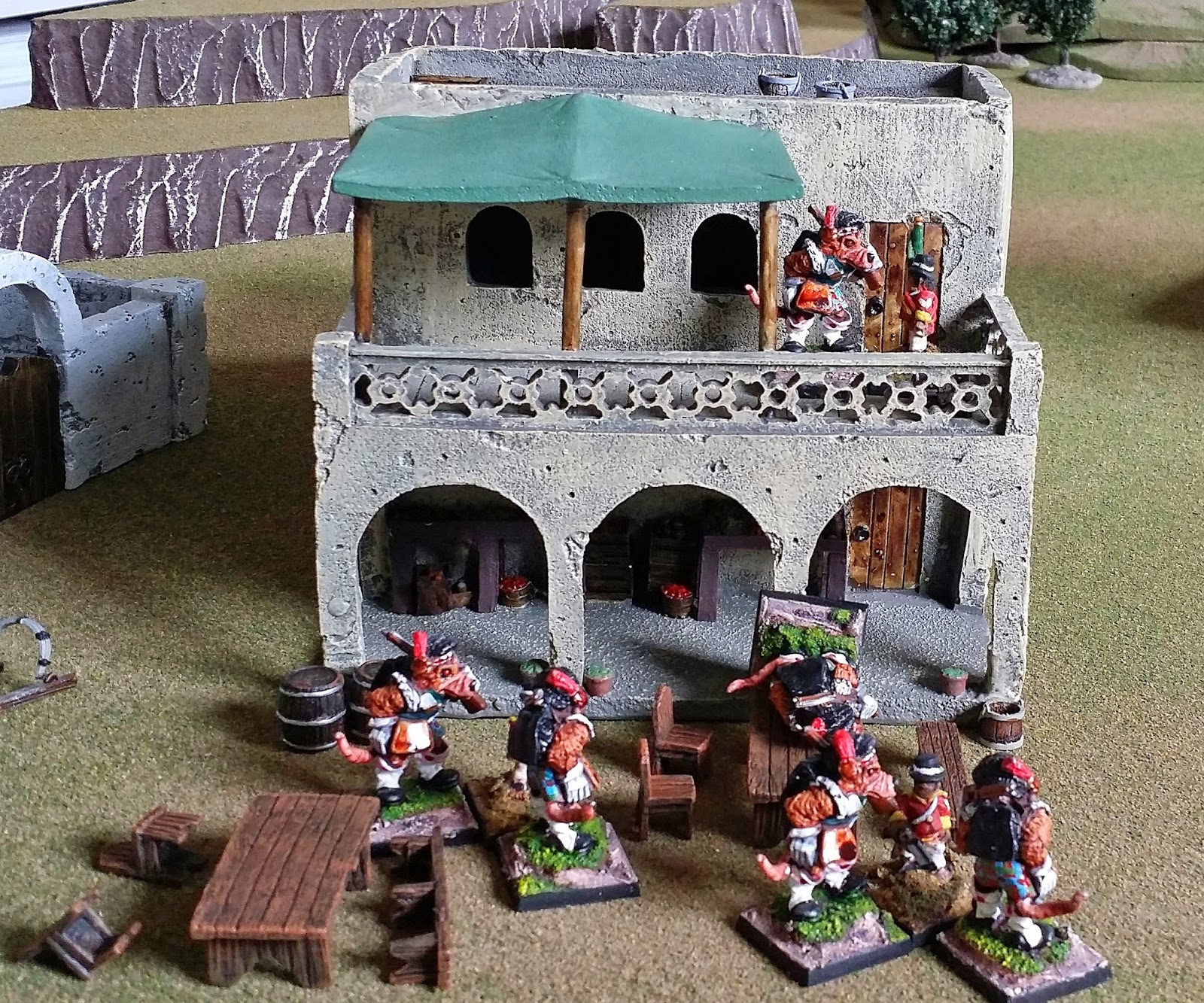 Meanwhile Machutney knocked his target down but the rat was fast up on his feet again.

Balifine flailed at his foe but to no avail. 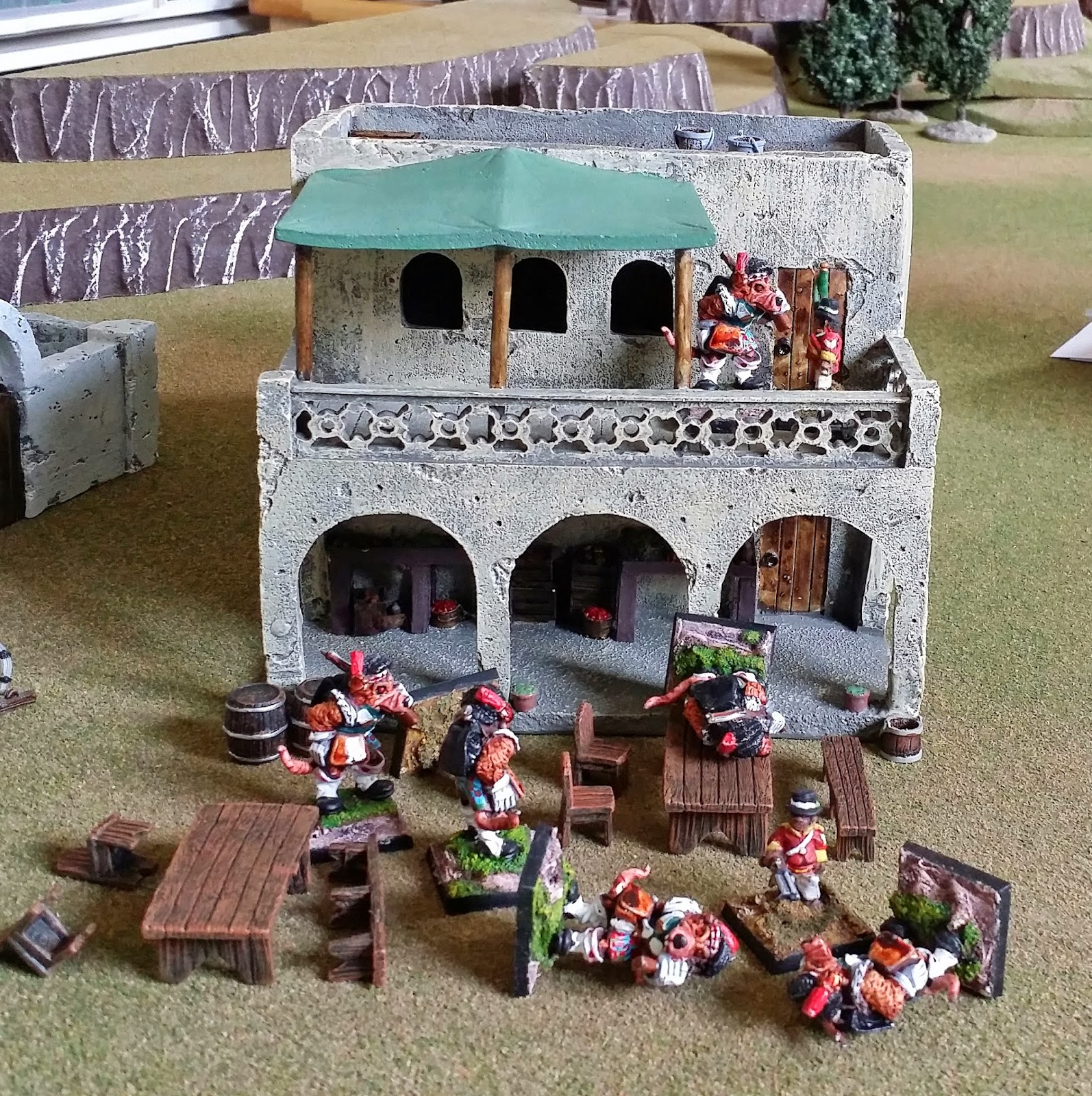 On their activation the remaining rats charged.
Quatar held off his assailant.
Machutney brought down both of his foes.
Balifine went down under a flurry of furry blows. The second turn initiative roll saw the arrival of the Provosts! 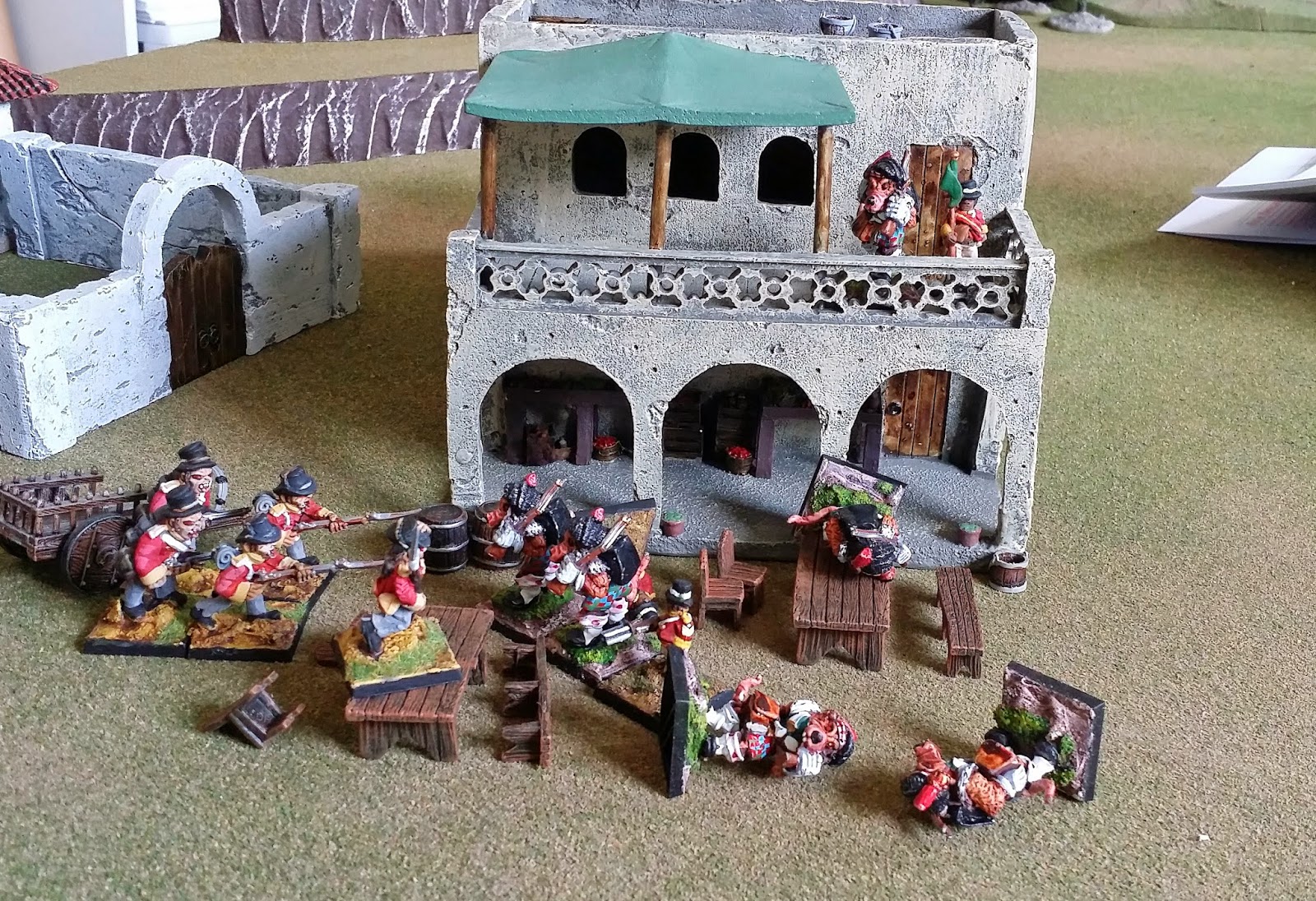 The Sergeants were frog marched off to face the wrath of Captain Giglamps.

Little did they realize that the Captain had sent the Provosts looking for them.

There was a very dangerous job to be done...

That's it. A very short game and very enjoyable. Unlikely the Provosts should have shown up so soon but I was hoping they would put in a quick appearance to lead on to the next game..."Finding Faccia da Rospo".