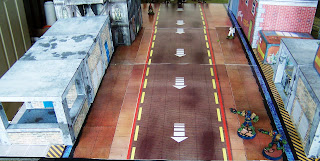 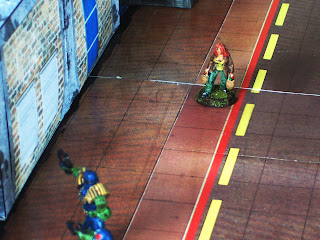 Turn Two
The PEF activated first and continued towards us. It was revealed to be a couple of shoppers. However as this was our first PEF revelation of the game we had to see if our Intel was good.
It was not. Well it was almost good.
Raven made us and exited the front door of Terracreds, MP's blazing! 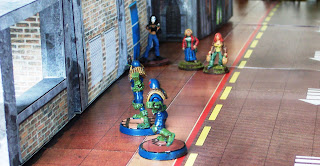 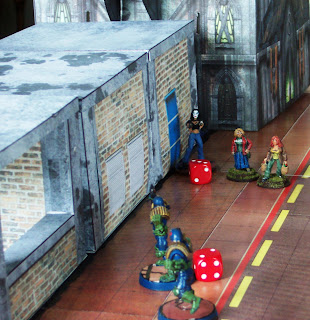 This generated an In Sight test with my boys counting as the active figures. Dice were rolled and Raven scored best passing 3 dice. Bain passed 2 and Suerte none, meaning he would not be able to fire. 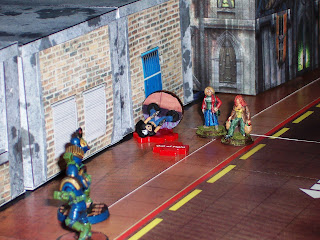 Fortunately Raven fired wildly missing one and all. Bain shot so well I was able to pick the impact point, hitting Raven in the chest and putting her Out of the Fight.
It was all over.
Bain acquired 10 fame points and Suerte 5 from this escapade.
Raven recovered from her wounds and faced trial for Attempted Murder, Resisting Arrest, and Robbery.
She managed to cough up the funds for respectable representation and beat the charges of Attempted Murder and Robbery.
Unfortunately for her, she was convicted of first degree Resisting Arrest and sentenced to Death...
Sentence to be carried out in 3 months. She may attempt an appeal.

She fought the Law and the Law won.
Fun game. Fast playing.  I'm sure you all will love it when it is released.

Had forgotten how much my hobby time is eroded in summer. Still managed to bang out a couple of figures and some paper terrain this past week.

The Judges of the Titan Rangers have so far come from both Indieclix plastics and vintage Citadel metals. In the search for new recruits I've added a couple of Mongoose Judges. First figures I have painted in some time so please be kind : )

The one on the right is marketed as "Judge Dredd" so this makes the third Dredd on my force. However I think this one will be Judge Esqueza while that on the left is now Judge Baen.

The City: Turns out that Ed has been working on a brilliant set of rules called 5150 New Beginnings that actually has many of the things I wanted in "Space Cowboy" already incorporated. As such I have switched to using those rules for my games (mostly).
One unique aspect of the new rules is that encounters can be played out on a surfaces as small as 2' x 2' and to that end I  have gone even smaller, playing the street encounters on a single sheet of foam core.
The Megway down the center is from the old GW City Blocks that were produced for their late lamented Judge Dredd RPG. The buildings lining the sides are from a variety of paper figure manufacturers. I wanted the architecture to represent several time periods in the city's development cycle, with a good mix of old and new all of it run down.

The buildings themselves are not fastened to the board for maximum flexibility.

So, how's it working out then? Both new officers were gunned down on their first patrol : ( Typical and why I should never paint figures myself!

Coming soon-ish will be a prisoner escort mission ala Six Gun Sound, albeit in the high tech dystopian future of the Titan Rangers.  A couple of Judges on Lawmasters with a couple more transporting the prisoners in a Black Maria. The oppo will be a rival gang and some of Titan's larger wildlife...