The Bayrum and Anthill Dragoons

Another troopship from Scotland arrived yesterday carrying the second half of Der Kleine Fritz's army.

It brought the second half of the first two cuirassier regiments, another infantry battalion, the converged grenadiers, some jaegers, two guns, and these fellows:

The Bayrum and Anthill Dragoons 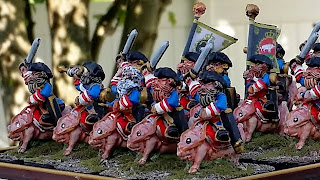 As always the service from Alternative Armies was first rate. The painting, as you can see was splendid as well.

There was a slight hiccup with the order in that although the dragoons received the correct standards, their coats were split among the yellow and white of the two cuirassier regiments.

Twenty minutes or so with the paint brush set all to right.

That just about completes this army for old school gaming. Three 40 figures line battalions, one 40 figure grenadier battalion, one 36 figure light infantry battalion, a 20 strong regiment of hussars, two 20 strong cuirassier regiments, the 20 strong dragoons above, and six guns along with extra officers, and casualty figures.

A short post this time on maximizing a unit's usefulness.

In this case Alternative Armies Orc Lifeguards painted as the Blues, 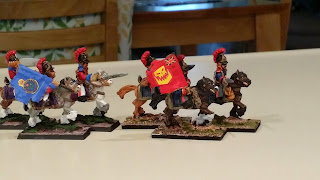 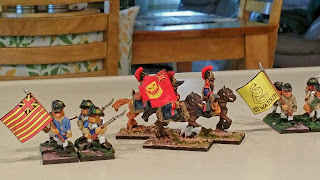 or, Colonial rebel dragoons as needed.

In this case I was able to craft a flag to serve both forces.

Hope this sparks some ideas for multi-purposing some of your figures.

Time out for Assassinorum Execution Force

As regulars will be aware, painting figures is not my primary interest in this hobby. As such this has led to a huge pile of lead (and plastic) lying unpainted about the place.

However the urge does occasionally strike and so with my dear wife away on business and the fortutious arrival of the "Assassinorma Execution Force" board game from Games Workshop, I put game writing and designing aside for a couple of days.

Day one consisted of assembly and priming. I know there are lots of folks who love the possibilities that multi-part plastic kits permit. I am not one of them.

I would have much rather snipped the figure off the sprue, glued it to its base, and been priming than to spend a day assembling figures.

Each chaos cultist (15) and chaos space marine (3) consisted of two pieces plus base.  Each assassin (4) and the big bad chaos sorcerer (1) consisted of ten parts minimum. At least it was easy to build the assassins separate from their overly c;uttered base.  That is another area where I part company with many of today's enthusiasts. I do not want my figures lugging terrain around with them when they move.

The sorcerer has an adorable little familiar, who was refreshingly a single piece casting that just need to be based.

Now the figures themselves are quite lovely. The cultists are five of the same poses as those in the current 40K box set "Dark Vengence".

In any event they are jolly nice figures and I split them into more or less three groups of five for painting; red, tan, and blue. I thought I'd concentrate on their upper bodies and leave their lower bodies in various shades of grey. This provides some detail where folks will most likely be viewing them, while cutting some corners where they would not.

Next up are the heavies. One area where Chaos has gone wrong since the 90's is conformity. Maybe that is the whole point. False gods making false proclamations about the nature of chaos just to lure the gullible into supporting them. Whatever the reason the forces of chaos have become distressingly uniform over time. I tried to paint the three space marines in slightly different schemes while keeping the base red.

The sorcerer was quite a bit more work with all the baroque detail on his costume but I soldiers on and am happy enough with the result.

The assassins were a bit of a challenge. I didn't want to use the contrasting colour schemes that GW uses. I mean they are "assassins" not art deco inspired hipsters. So, low contrast, mostly black was the key. I splurged a  bit on eyes and optics to make them pop.

I used Army Painter sprays, red for the heavies, black for the others, to base coat. Other paints were a mix of Army Painter and Vallejo with extensive use of Vallejo inks. I love inks me.

Now I just have to decide if /which bits to wash, paint bases, and seal.

Hope you enjoyed the post and thanks for stopping by.