Again these figures are chock a block full of character and fun details.

Unlike the tribal Bagginsa, are a much more cosmopolitan group.

composed of slaves taken by the Otterman Empire from both the halflings of Gorgon and Afri.

Also unlike the Bagginsa, I painted these fellahs in very bright costume. It's all a bit too too, but there is a method to this madness. 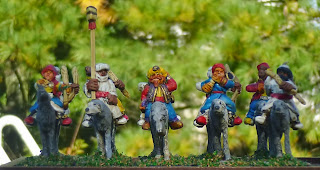 As opposed to the Bagginsa, the Mamelukes will be fielded in mixed units. 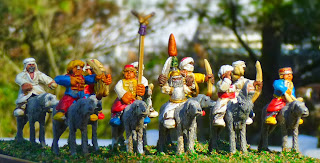 That is to say where the Bagginsa are a single unit, when called upon to do so they will be mixed in with the Mamelukes. As you can see from the photos the white robes of the Bagginsa tend to merge with the more colorful Mamelukes in quite a pleasing manner.

Below are photos of each of the ten Mamelukes. 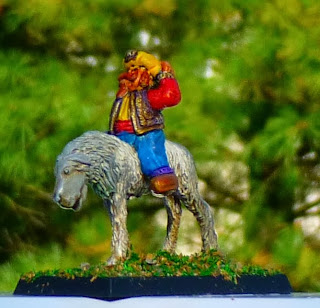 First up is Frodo Barbarossa, my favorite figure from this batch.

There is a great deal of detail in his vest that may not show well in these photos. He really is a stunning, imposing, chap sure to strike feelings of...something...in his enemies.

The rest of the unit have no names assigned.

The standard bears the crossed pipes, a symbol dear to any halfling heart. 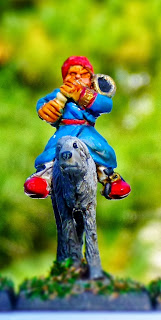 The chap on the right might actually be a chapette! She must have been taken by mistake as ordinarily only boy children are taken as Mamelukes. Still she must be very safe in the barracks.

This is another of my favorites, arrow knocked and ready to be drawn.

Finally this fellow is another of my favorites. Sadly he lost his bow in an industrial accident in my yard. It is now somewhere in the grass awaiting discovery by an archaeologist in some future age.

Fortunately I have some GW Goblins on hand awaiting conversion to Insurrectos. As some of them will have muskets I could spare a bow, and the hand holding it (!) for this Gorgon chap.

So there you have it. Twenty custom halfling desert raiders for games of Flintloque, Slaughterloo, Muskets and Shakos, or any place else bad tempered little mounted bow folk are needed.

Elton did provide on special figure that had not been requested, and special he is too.

I am going to work on him along with his accompanying halflings and so will reveal him in due time.

In the days before the Annul of Magyke, most of the Gorgon region was part of a human empire.

Gorgon was ruled by Duke Konstantine in those days.

The Duke was a fierce warrior and able general.

Regarded as an eccentricity be some, Duke Konstantine would never appear in public without his dedicated core of Halfling fighters, The Weemangian Guard.

Sadly the Duke, and the stability that the Empire provided are mere memories to the beleaguered halflings of Gorgon, and all that remain of the Weemangian Guard are the six stalwarts pictured here.

Once again these figures are from Citadel and have been living in their blister in various basements and such since purchased in the 80's. They have survived four or five moves, a career, and parenthood to emerge now, like so many tiny little King Arthurs, now in this hour of need...or more properly in this hour when I finally felt like painting them and had the time to do so.

These fellows are among the more heavily armoured figures in my collection so I thought they should be "regulars" rather than the militia or armed townsfolk that make up the bulk of my halfling forces.

This time I've only taken close ups and all-rounds of each separate pose rather than each finished figure. 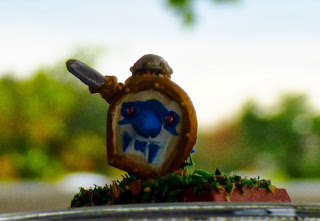 This chap is their Kapitan, whose name I have already forgotten. No doubt it will come to me as I only made it up yesterday! 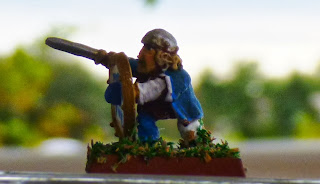 With the Gorgon Halflings I've tried to create several different factions within the community that can variously be at odds with, or allied to other factions. This help represent the many fractures in post Annul Gorgon that have made the halflings easy pickings for both the Zombie Cossacks to the north and the Ottermen slavers to the south. 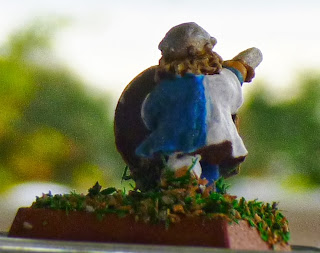 The Weemangians can serve as protectors or bullyboys as required and may represent the only trained troops able to contend with the Templars should need arise. 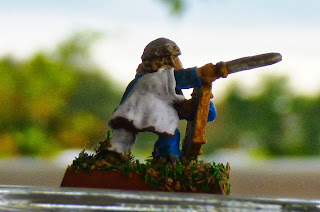 Conversely the Weemangians could serve as added muscle for the Templars in their quest to root out heresy and the Old Religion. 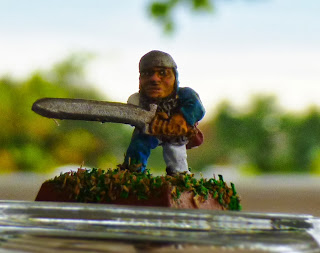 There are three of this casting, wielding what must be a fairly short human blade as a two handed weapon. 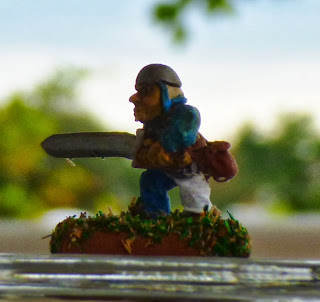 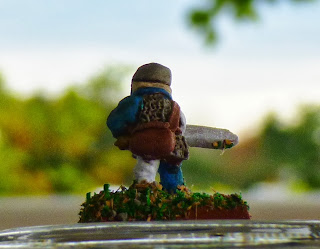 Just ignore those bits of flock stuck to his sword. They have since been dealt with. 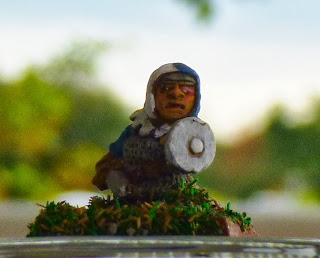 There are two of this casting. This particular chap has lost an eye...or so that is the effect I hoped to create through painting. Thought it gave him some added character. 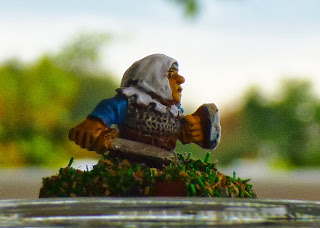 Once again I have gone for the fairly stereotypical red noses and rosy cheeks that to some extent mark these halflings to garden gnomes more than Tolkien. 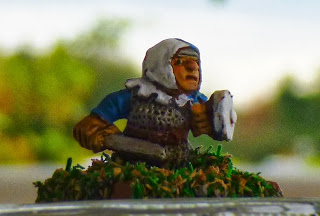 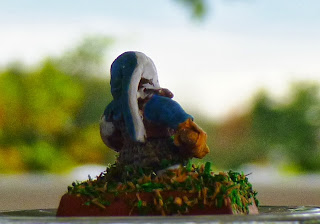 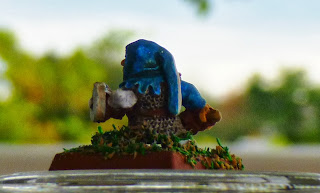 Only one more batch of vintage halfings left I'm afraid although I do have an extra blister left. Those figures are duplicates of others I've already done so not sure if I will add them to the muster or not.

Will arrange a group shot of the halfing unit that will form part of my Empire army if and when the time comes.

That's all for now.

Finished up the Bagginsa mounted archers today. Some group photos with an individual shot of each figure.

These are half of the figures sculpted by Elton Waters that I have been working on this week and once again I must say "Thank you Elton!".

Here is the leader. Not sure of his name yet but I have added a carrot fetish to his head both to signify the importance of the carrot in my version of Afri, as well as to poke a bit of fun at overly spiky models. 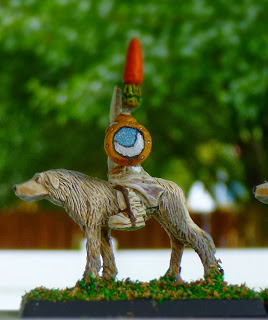 In Afri, carrots play the same role as ivory in historical Africa. The abundance and size of Afri carrots is the main impetus behind the Burrovian Free State. We all know that rabbits are mad for carrots. 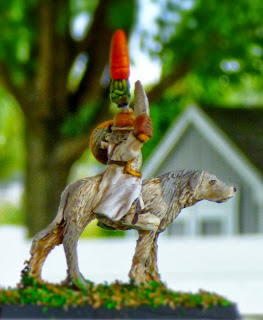 The various halfling tribes raid for carrots and slaves and the Bagginsa are fairly accomplished raiders.

These figures were painted very much as a unit. One day I may go back and detail the eyes, and perhaps spend more time on the dogs. 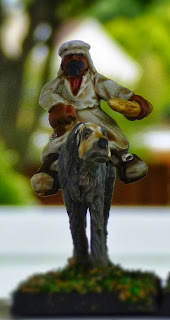 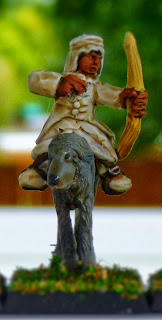 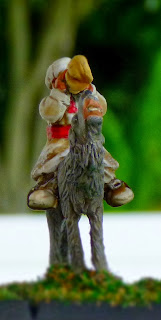 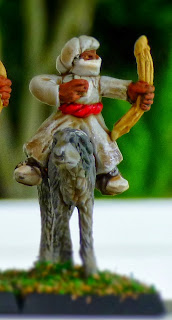 Well pleased with the results here.

Hope you were too.

Email ThisBlogThis!Share to TwitterShare to FacebookShare to Pinterest
Labels: The Suddan

A while ago now, I wrote a post on the Notables Yahoo Group lamenting the lack of Halfling cavalry figures currently available for Flintloque and Slaughterloo.

You see the Halflings are the games' Mamelukes, skilled and flamboyant warriors riding to war on their feet Saluki hounds. While there is one halfling cavalry code, a light lancer unit with officer and standard, there just wasn't enough variety.

In addition I wanted to field bow armed halfling riders and in the game world of Valon, Halflings are not capable of using missile weapons.

Elton Waters, fine fellah that he is, offered to convert several figures using the existing mounted halfling as a base.

The end result is two units of ten figures each and an additional bonus figure!

Here are some photos of my painting efforts with some notes interspersed. 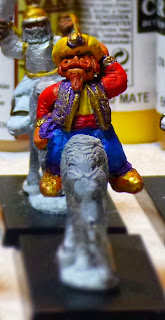 This imposing chap is known as Frodo Barbarosa. Frodo was taken as a slave from the Gorgon Halflings and raised by the Ottermen to serve as a Mameluke, a calling to which he has proved admirably suited.

So effective a raider is he, the Barbarossa now considers himself only nominally under Sultan Selim's command and more often sees their roles reversed.

Here are the twenty figures. The front rank are Mamelukes while the second rank are Bagginsa halflings from the Suddan.

Here the Bagginsa are front and center for your perusal. The idea here is that the Bagginsa appear as no nonsense desert raiders and hunters not much given to frippery. 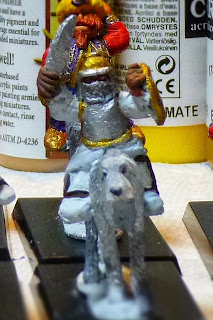 Here is their as yet unnamed leader. 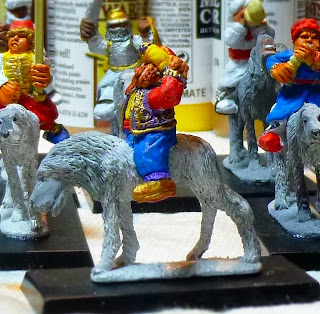 A side view of Barbarossa. 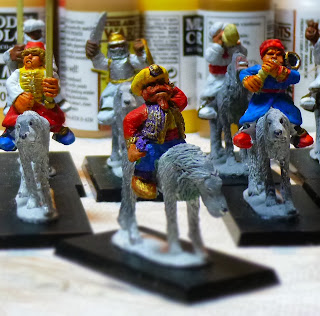 Close up of some of the halflings.

Close up of the others.

The paint scheme is designed to allow me to field the two units separately or in mixed units.

Had planned to dip them in Army Painter soft tone tomorrow and then work on the dogs.

Having second thoughts and may skip the dipping in exchange for more colored inking.

In that case I would work on the dogs first.

A big thank you to Elton!

Will post photos of the completed villains once they are, uh, completed.

Thanks for stopping by@