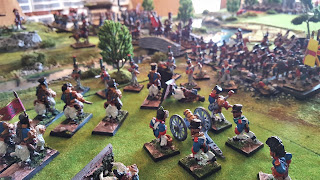 The assault is now well and truly under way.

In short the 12th evaporated in cloud of musket smoke as the valiant South Mordor continued to defend the crossing. The 12th lost its Eagle!

The rump of the 12th, held back from the assault, sent the Regiment Gobilinado packing.

The 66th Legre not only saw off the Eyeshore Light Dragoons but in so doing routed them.

The 23rd followed up the 12th with better result but still did not force the South Mordor to retire.

And finally, the Coltzen Lancers are across the bridge and overrunning the Orc battery.

Meanwhile, Albion reinforcements continue to arrive, in addition to the South Mordor, the enemy now boasts the Killmore Highlanders, the Eyes'n'Gourds orc foot, and two battalions of the Regiment Gobilinado.

A long range volley brings down the valiant Colonel of the 12th Ligne. 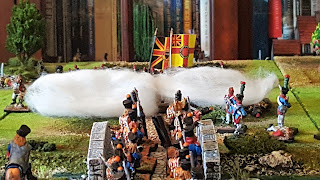 Still the battalion marches on.

The Eyeshore Light Dragoons arrive on the field.

As does the first battalion of the Regiment Gobilinado, bringing the hard pressed South Mordors some much needed support.

Their ranks thinned, the 66th Legre suppresses the orc battery, while the 12th Ligne crosses. 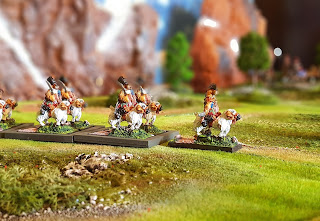 Another shot of the Eyeshores. I feared they would put an end to the 66th before any support could reach my Voltigeurs. 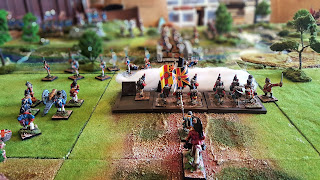 Colonel Symmerson proudly looks on as his orcs drop in their ones and twos to sniper fire.

The Goblins advance just as fast as their tiny legs will let them.
Perhaps not the best troops for a "fire brigade"? 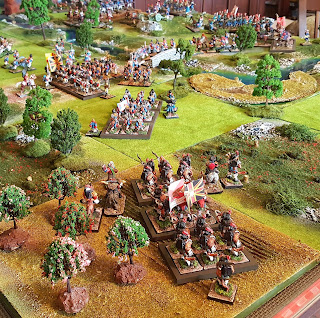 In the foreground the Killmores arrive on the field.
In the background the 12th has launched its assault leaving one division to confront the approaching goblin menace.

Another view, this time from behind the South Mordors.
Note the Eyeshores closing in for the kill center left.

The 23rd moves to support the 12th across the Anduin.
Imperial forces queue up waiting their turn.
Nothing subtle in this offensive. 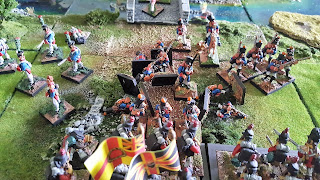 The 12th is badly shot up but a few brave souls make contact with the Thin Red Line. 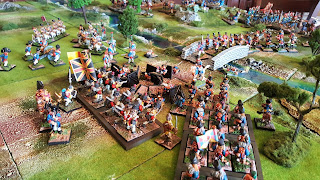 The result is predictable. The assault column is wiped out. 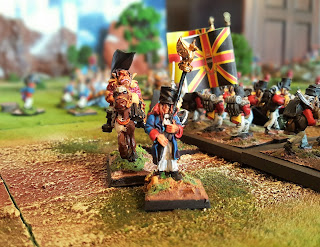 True to form, Symmerson seizes the Eagle from the soldier who captured it and leaves the battalion in order to present to Gen. Gordon in person.

Their Eagle lost, the 12th have succeeded in  disrupting the South Mordors long enough, 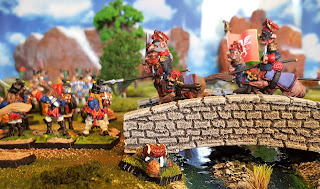 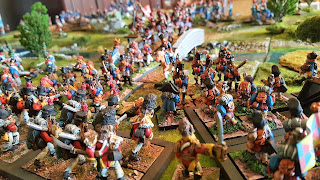 The remaining division of the 12th repels the Regiment Goblinado. 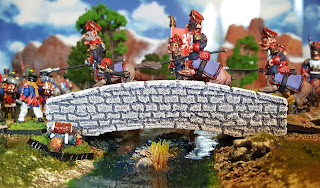 Only one brave elf of the regiment remains.
They may have lost their Eagle but they have covered themselves in Glory.
But will it be Glory enough for the Emperor?

The Killmores deploy to cover the west side of my bridgehead. 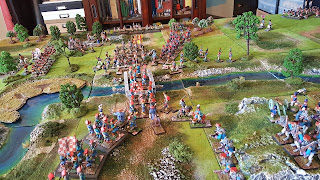 In the far distance, the Coltzen Lancers can be observed overrunning the orc battery.
A second battalion of Goblins forms a backstop behind the South Mordors and the routed Eyseshores are withdrawing to the right.

Slowly the Diberian is hauled to the front while the Dragons overtake them.
It is a race for Glory.

The 66th recover after their surprise defeat of the Eyeshores.
They have even taken a prisoner, foreground left. 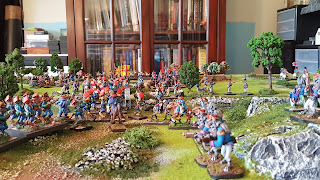 The chaos of the Napoleonique battlefield.

Purists, squint and use your imagination...

...and you may well see the chaos of the Napoleonic battlefield as well :)

And as always thanks for stopping by!
Posted by M. C. Monkey-Dew at 1:52 PM