Got in some more work on "Baker Rifle", that is not what it is going to be called mind you but it sounds a lot better than "The Napoleonic Skirmish Game to be Named Later".

It has always been my intention to cover not only the battles and intrigue of figures like Sharpe and Hervey, leaders of men, but also to allow for the exploits of individual soldiers behind enemy lines such as Rifleman Dodd.

At first this looked dead easy as a good deal of this sort of thing could be looted from "Savvy and Steel". However looks can, as always, be deceiving...

Every story needs a beginning and so does that of stalwart Rifleorc Plodd. The Chosen Orc has been cut off behind enemy lines during one of Wheeling-Turn's many retreats in the face of overwhelming elven forces.

What Plodd must do is cross the board, dealing with any enemy forces generated by the game system, while at the same time being pursued by a potentially large force of elves coming up behind him.

Plodd has three turns of movement before his pursuers appear.

The Field is lain out using playing cards arranged in a 5 x 5 offset grid. Each card represents about 8" of space. This nominally brings this game above the Two Hour Wargame standard of being able to be played on a 36" x 36" surface. However its an easy matter to cut the outer rows of cards down by a few inches in order to make them fit.

One could even play the game on the cards alone, which for someone just starting out in the hobby allows for gaming without having to purchase or make a good deal of scenery ahead of time. Even for veteran gamers, playing on the cards allows for a very quick game indeed.

I first came across the idea of using cards to make the playing field in one of the many fine Flintloque articles published on "Orcs in the Webbe". That game featured some mayhem at a sanitarium and the cards were used to lay out the facility.  Cards were also the method I used to lay out the subterranean Nazi lab in Rebel Miniatures
" A Walk in the Dark".

This time the cards will be used to lay out some cluttered terrain in sunny Catalucia/Spain.


Our hero starts on his base line. The first thing to be done is to turn over the cards and see what kind of terrain he is approaching and what terrain he can see in the distance.

Plodd is emerging from the cover of some walled fields and approaching some buildings. One fo them is a stable which would be a great piece of luck if only Plodd could ride. He can't though and so he must march on.

At this point Possible Enemy Forces (PEF's) were generated to potentially populate the countryside. None of them are in Plodd's sight from the start with one in the cantina, far left, one in the center screened by the wood, and one in the far left hand corner, screened by the buildings to his front.


Wanting to keep to cover as much as possible, Plodd moved to the building, dead center. From here he spied a wooded rise and walled field off to his left. There was also another building revealed beyond the wood to the right. The central PEF, located in the wood on the right of the rise is sighted and revealed to have been a false alarm.

On the elven go, the left most PEF advances onto the ridge and is revealed to also have been a false alarm.

Plodd continued forward into the central wood. Craftily he hoped to keep the building between himself and the PEF in the cantina.

Thus far things had been going really well for Plodd. Now, however, the elven pursuit arrived in the form of three PEF's entering from Plodd's base line. Fortunately they could not get eyes on him for the moment.

Emerging on the far side of the central wood, Plodd could see a vineyard, and beyond that, freedom.


Just as Plodd was readying himself for a dash to freedom, he spied movement in the vineyard ahead. 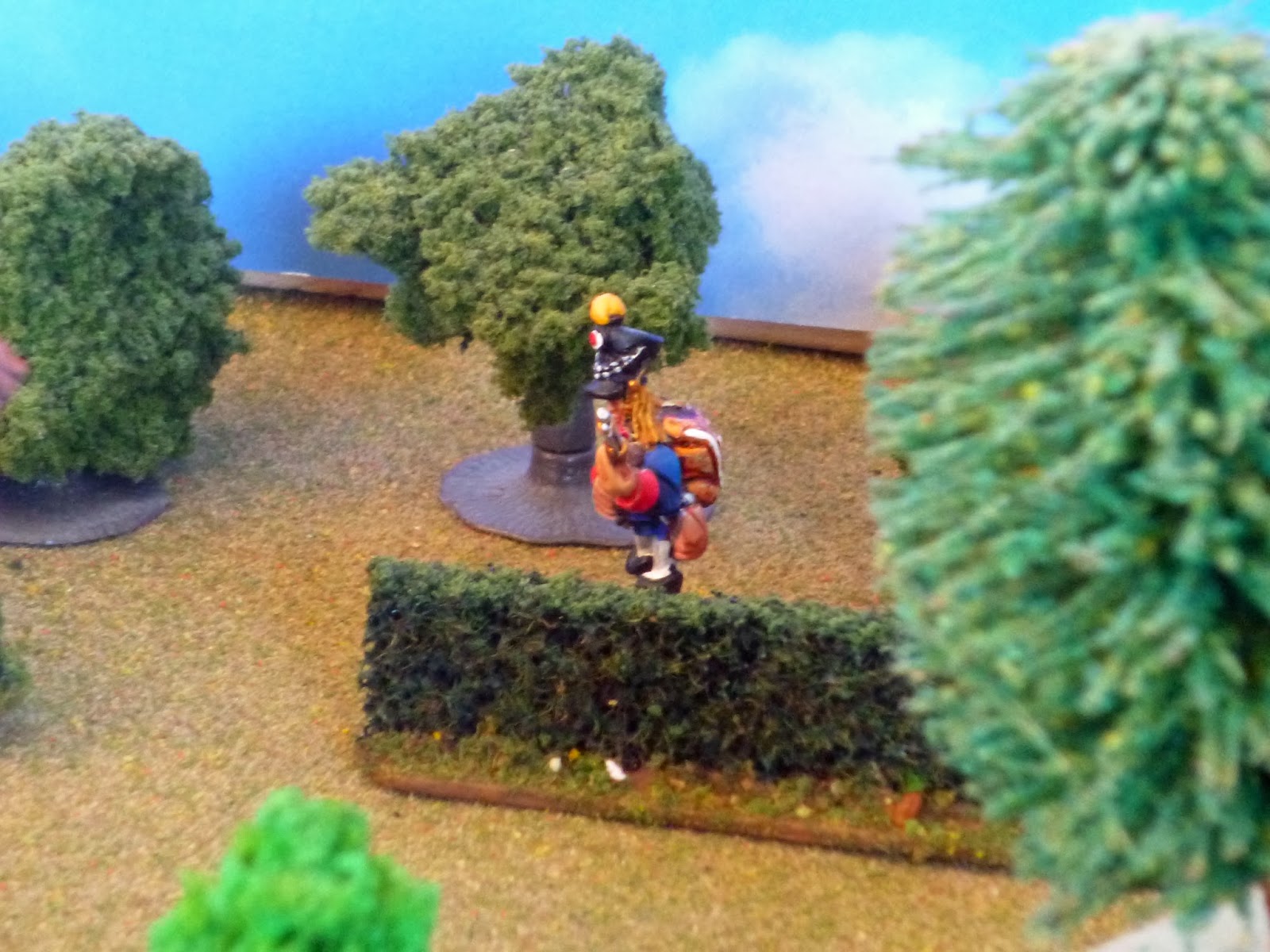 The elf raised his musket to fire and...CLICK. A misfire! Oh the joy!


Summoning all his courage, Plodd charged towards the elf...only to be fired on by two elves by the cantina.


Both shots found their mark and would have lain poor old Plodd low had he not been a Hero!

Normally I don't go in for the Star benefits in my games but this one is very much a work of fiction and so it is only appropriate that our heroes be larger than life, or more specifically in this case, avail themselves of hero dice.

Plodd lost two dice in the process but was able to convert his hits into mere flesh wounds.


With a final rush, Plodd confronted his elf.

The sheer ferocity of his attack forced the elf back.

Before his foe could recover, Plodd slipped away to freedom...

So there you have it.

Plodd dodged three elves and although he remains a fully fit Rep 5, he is down to 3 hero dice.

Plodd needs to continue his journey, trying to remain at large and possibly joining up with a band of guerrillas, if he can only contact one.

First use of the terrain cards went very well but it is early days yet.