I am a firm believer in never letting a terrain set up go to waste. It takes some time to set up a table even when using a random terrain generator and that takes away from gaming time.

With that in mind I try to use each layout for two or three games before cleaning up and starting again.

So here sunny Spain from 1810 has been transformed into NW Europe some time in 1944.

Having recently picked up the reissue of "Operation Warboard", my interest in gaming WWII land battles has been piqued again.

So with a couple of boxes of Airfix, and Valient, and some AFV's from forces of valor all is ready.

Now I must first apologize for the look of the thing. You see I do not paint my WWII infantry. For reasons of my own I prefer to think of them as toy army men rather than real folks.

That out of the way, the scenario is once again a scout. This time I have a company of British infantry.

I entered one platoon at start moving for the wooded hill center right. It turned out to house a Stug that did for my officer and PIAT man.

Faced with being overrun by the rest of the platoon it drew back to the farther ridge line. 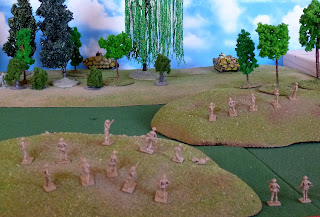 So I set up a fire base on the near hill while occupying the middle hill.

Meanwhile a German Panzerschreck team and another Stug (!) arrived from off board.

I'm calling a halt until my Churchill troop arrive. They are in the post and should be here tomorrow...

Hope you enjoyed this bit of silliness.

As an aside, "Operation Warboard" is a standard, two player, miniatures game. I am using solo mechanics from the original THW "Nuts!" rules modified by some of the techniques in Muskets and Shakos for the German AI.

Back in the day when Ed Teixieira first suggested his idea of treating tanks like wandering monsters in a fantasy RPG, I was non-plussed. Happily the mistake was mine. A fine mechanic for solo and co op gaming.
Posted by M. C. Monkey-Dew at 5:59 PM