Having just finished the Bog Orc Rebel musketeers I couldn't help but put on a game featuring same.

The table was actually set up for Rolica but with the addition of some hedges, a watchtower encampment and a ruined monastery the scene was set.

The set up is simple. The Annul of Wylde Magic is taking effect and the wee folk of Guinalea can feel their power weakening. The council feel they must strike now before it is too late.

A detachment of the Benevolent Guinalean Organized Republican Army (BGORA for short) has been sent to ambush a Fencible  patrol led by Major Snivlincove.  The Fencibles have built a series of watchtowers to keep the Gunaleans in check and one such needs to be neutralized before the patrol can be safely attacked.

The BGORA force consists of a wee folk Sergeant, Sniffles Shortlegs, commanding two sections each of one wee folk leader and six Bog Orcs armed with a musket and hand weapons.

The wee folk themselves are armed only with their silver daggers and what is left of their magic. While the Annul has robbed them of most of their tricks the wee folk can still teleport to any location in LOS however even this has gone a bit wonky.

A wee folk can declare he is going to teleport at the start of his activation. The player nominates a landing point and rolls 1d6. On a 1, 2, or 3 the wee fellow is moved to the new location and may test to charge if in base to base contact. On a 4, 5, or 6 the attempt fails and the wee one's activation is at an end for this turn.

His Majesty's forces were present in two detachments. The tower garrison consisted of four Fencibles,  one up the tower on look out while the other three tended to their chores.

The other force was the patrol led by Major Snivlincove. In addition to his august self the patrol numbered one sergeant and eleven private soldiers as well as a wagon drawn by four oxen.

The game would start at dawn. The BGORA force had crept into position under cover of darkness. The action would kick off with one of the wee folk teleporting to the top of the top of the tower to silence the guard there.

After that the BGORA forces would use their time tested all out charge to sweep the Fencibles away.

The rules used were Long Rifle published by Two Hour Wargames along with my amendment for using Flintloque figures. I would commanded BGORA forces while the game system took on the role of Snvilincove.

The Major, Sergeant and wee folk were all Rep 4.
The private orcs and bog orcs were all Rep 3 (militia and irregulars respectively).

The game started well enough with one of the wee folk section leaders teleporting to the tower top and silencing the guard there.

With that the BGORA troops rushed the Fencibles.

The working party were quick to take up their muskets and fire. The same wee one that took the tower top teleported down to engage the working party.

Snivlincove's troops were alerted by firing of the garrison and prepared to take action, smartly turning right into line. 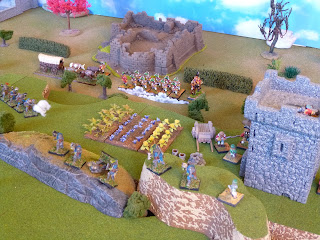 The front rank fired, dropping one of the bog orcs attacking the tower. 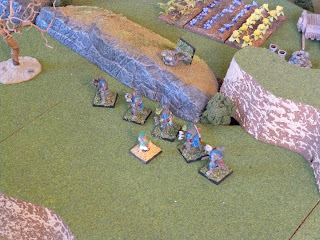 This caused the right flank BGORA section to retire much to the chagrin (and no doubt colourful language) of Sgt. Shortlegs. 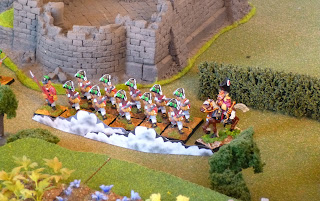 At this point Snivlincove fair seized the initiative as the BGORA attack bogged down. 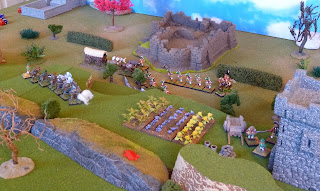 While the first rank reloaded the second rank advanced up slope to attack the left flank BGORA  section. 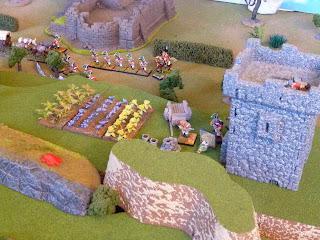 Meanwhile, after some initial success the wee one fighting at the base of the tower was overcome by strength of numbers. The Fencibles bound him with chains of iron so that he could no longer teleport. 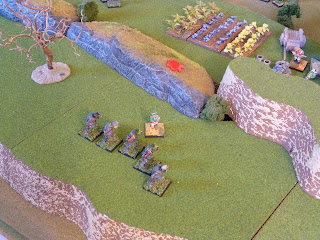 Sgt. Shortlegs implored his bog orcs to return to the fray but they would not listen to him. 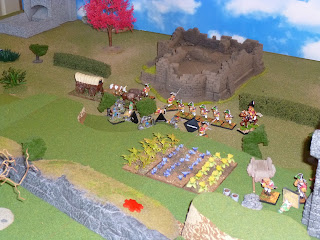 The left flank BGORA section charged the orc line as it struggled up the hillside. 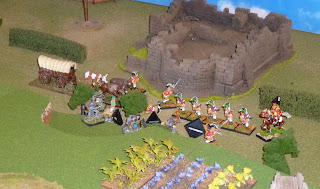 Casualties were fairly heavy on both sides but the Fencibles broke and ran! 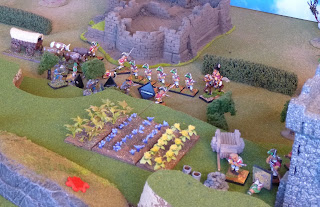 However the impetus of the bog orc charge was spent however and Major Snivlincove lost no time reorganizing his remaining troops. 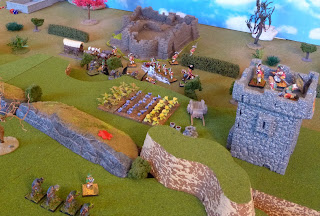 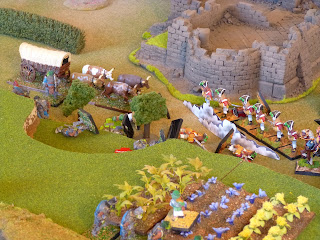 And just as Sgt. Shortlegs brought his section back into the fight, the Fencibles vollied again, killing the left flank section leader. With their beloved wee folk leader dead, the remaining bog orcs of the left routed!

With one wee folk section leader captive in the tower and the second lying in a spreading pool of green blood, Sgt. Shortlegs called off the attack. 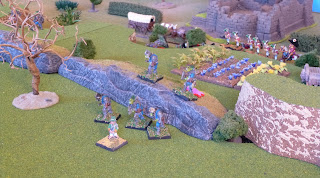 The combat debut of the BGORA light brigade was less than stellar but it did prove that bog ocrs can indeed fight and fight well...with wee folk leadership. 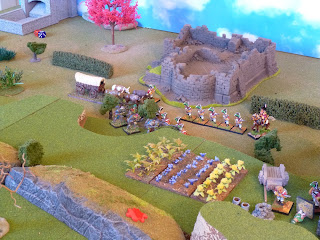 Fun, quick game and that was all that was required for an afternoon's diversion.

Hope you enjoyed reading about it as much as I enjoyed playing the game.

On a final note the photos did not come out as well as I would have hoped. I am learning the functions of a new camera : (

Email ThisBlogThis!Share to TwitterShare to FacebookShare to Pinterest
Labels: The 98