Reader gsg requested a detailed example of WHAA big battle combat as carried out in the Orc's Drift game. A fine idea so here it is.

This post will look at two turns of combat at Kachas Pass. The example starts after the elves have activated and it is now the orc's turn to go.

The orcs have two bodies formed; one consisting of 12 Rep 4 orcs with a banner and one consisting of one Rep 7, Terror, Artillery, giant. The elves are a single body of 5 Rep 4, Elite Trained Missile, elves behind a wooden fence (generously considered a "field work" here).

The orc player (me) decides to charge with the orc body first. 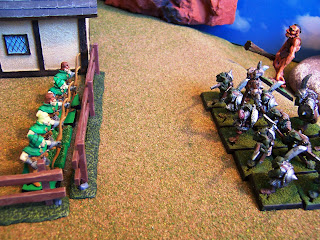 Coming within 8 inches of the target, the orcs and elves must take the Test of Wills. This is largely a formality as I intend to close anyway but for completeness sake here it is:

Elves fire.
The elves roll 5 dice, four for their Rep and one for being bow armed. As they are Elite Trained they will automatically pass at least one d6.

The orcs roll 4 dice for their Rep. No other modifiers apply.

The orcs pass 3 dice while the elves only pass 2.

Checking the Mass Battle QRS Firing Table, we see the lower scoring side scores one hit per every four figures firing. As there are 5 elves firing they inflict only a single hit.

A roll on the firing damage table results in one orc Out of the Fight.  Whenever a figure becomes Out of the Fight, Retires, or Runs Away the two nearest friendly figures must take a Crisis Test to see if they flee the field.

As the orc body has a banner in the front rank the orcs get to roll 3d6 for this test. One figures passes with no trouble while the second figure only passes 1 d6. This figure must retire on a friendly banner or rout off the table. It so happens that King F'Yar with his banner is behind the body about six inches away and the orc retires on King F'yar. 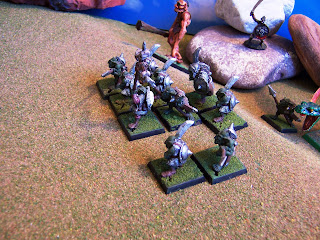 This ends the orcs' activation. Their losses and the retiring figure have left them broken up into three bodies, one of 8, one of 2, and one of 1 orc.

I now activate the giant who also wants to charge the elves. 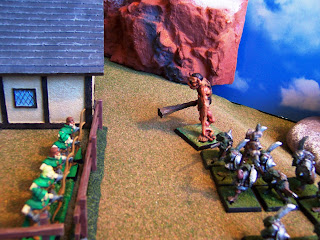 This time the giant rolls 7 dice for his test of wills while the elves roll only 3 (4 for their Rep less one because the giant causes Terror).

The giant passes 7 dice to the elves' 0 and will charge counting as if frenzied.

The elves roll 5 dice (Rep +1 for bow) and the giant rolls 7 dice. The giant passes 4 to the elves' 1. Again the elves inflict one hit per four figures firing or 1 hit.

The damage roll yields and out of the fight result but the giant has Hardiness 5 and so rolls 2d6 vs. his Hardiness passing both. The giant is "startled" and ends his activation.

That ends my turn with the loss of one orc, and my attacking force broken up and in need of reorganization. In retrospect I probably should have used the giant's artillery trait to throw a boulder at the elves instead of charging but frankly I forgot all about it.

Later on I have regrouped and am ready for another assault.

This time I have formed one body of 11 orcs and the giant. The elves have one body of  the same five bow armed elves and their leader a Rep 7 Elf has joined them. 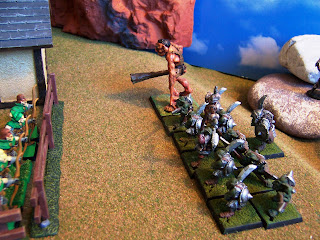 Again we start with the test of wills. This test uses the highest Rep in the body for the test and so the orcs use the giants Rep of 7 and the elves their leader's Rep, also 7. The elves' Rep is reduced to 6 by the giant's Terror trait.

The orcs pass 5 dice and the elves 4 and it's on to the charge test.

This time the orcs pass 2 dice and the elves 1.  The orcs charge home but not before elves loose another volley of arrows.

Combat tests use the "majority type" of a body to carry out. That is to say that whatever type of figure composes the more than half the unit, counts for combat purposes. Figures use their Hardiness   trait, if they have one, to determine how many "figures" they are for this purpose.

In this case there are 11 orcs and one Hardiness 5 giant. There are more orcs than the giant's Hardiness trait so the body counts as the orcs' Rep of 4.

There are five Rep 4 elves with one Rep 7, Hardiness 3, hero. The elves also count as Rep 4.

For firing the elves roll 5 dice (Rep + 1 for being bow armed) while the orcs only roll their Rep or 4 dice. The elves pass all five dice while the orcs only pass 2. Looking at the firing chart this means the elves will inflict one hit plus one more for each two elves firing. The five elves score 3 hits!

Checking the firing damage table the elves roll 3 dice scoring two 4's and a 6. Remarkably no orcs are hurt and one might even lose control and charge. As I am charging anyway I ignore the control test and go right to combat. 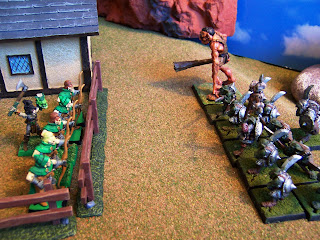 The orcs roll 5 dice (majority type Rep 4 plus 1d6 for being on larger bases than the elves) while the elves roll 3 dice (Rep 4, +1 for field works, -1 for Terror, -1 for being outnumbered).

The orcs pass 3 dice and the elves pass only 1.

For their part the elves still score one hit for every four figures engaged. There  are five elves engaged so one orc is removed from play. 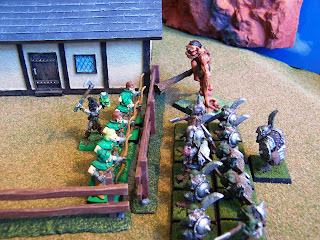 Normally both side would need to take crisis tests for losses but the Bloodbath at Orc's Drift campaign specifies that the defending elves will not rout so there is really no point in having them test.

The orcs however do need to test. One lost figure requires two figures to test. Both get to roll 3d6 vs. their Rep and both pass at least two and so do stay in the ranks. 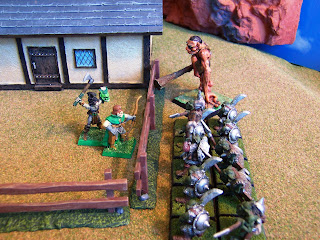 The combat has severely weakened the elves. On the plus side their Rep 7, Hardiness 3 hero is now the "majority type" and if engaged again the elves will count as Rep 7 for combat purposes.

My giant is still in the minority so it might benefit me to separate him out next chance I get or make him part of a smaller body of five orcs and the giant. That will give me five orcs to suffer from any missile hits while still leaving the body as Rep 7 in a fight.

Hope you have found this example useful.
Posted by M. C. Monkey-Dew at 2:01 PM