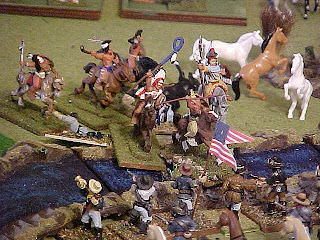 This supplement was written for the original version of Six Gun Sound. Players will find that most of this material can be used as is in Six Gun Sound: Blaze of Glory.  Feel free to alter anything here to fit your view of the characters and situations presented here.
Brig. M. C. Monkey-Dew (retd.)
December 2011 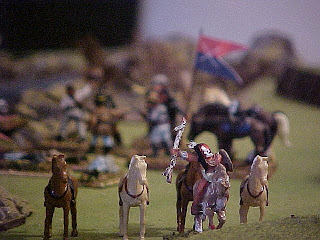 The following variant rules allow players to use Indians in the Six Gun Sound campaign game. As they represent a large departure from the other characters they have a lot of differing circumstances than the others. As such, if a player chooses to use an Indian Player Character then ALL of the optional rules that pertain specifically to them must be used.

Characters should be generated using the standard 6GS rules. Remember the +2 Toughness for Indians.

For the purposes of this game, player characters will be considered Renegades. This allows players great latitude of action without concern for the occasional years or relative peace between the government, the settlers, and the tribes.
Characters may be either Plains Indians (Comanche, Kiowa, Kiowa Apache, Arapaho, etc.) or South Western Indians (Jicarilla Apache, Mescalero Apache, Kickapoo, etc.)

Not all of these are applicable to Indian characters. Use your discretion. Note that
Plains Indians will automatically receive #6 “Have exceptional horse” as their first result.

Plains Indians may operate in all three locales. while Southwest Indians are limited to the Southwest and Texas.

ENCOUNTERS AND PASSAGE OF TIME
Possible encounters for Indians are listed above in the Locales Encounter Modifiers.
All Indian encounters take place “On the Trail”

AVAILABLE WEAPONS BY TYPE
For each figure required in an encounter roll 1d6 to determine what weapons are available.

Soldiers will carry both pistol and Trapdoor carbine or rifle.

CAPTURE (ATTACKER)
In this encounter the player’s band will try and capture prisoners.

CAPTURE (DEFENDER)
In this encounter the player’s band is attacked while in camp.
Follow the directions for a Capture encounter in the main rulebook except:
Roll 1d6 at start to determine the attacker
1-3 Posse
4-5 Rangers
6 Soldiers

The defender sets up camp in the middle of the table, one wcikiup/teepee for every two warriors or fraction thereof.

The player’s band is the rustlers. Play proceeds as described in the 6GS rule book except:
Roll 1d6 at encounter start to determine the pursuit
1-3 Cowboys
4-6 Soldiers (Rangers in Texas)

The player’s band might find themselves on either side of this encounter.
Roll 1d6 at game start
1-4 Player is the attacker
5-6 Player’s and is attacked by a hostile tribe. Having determined which part the player’s band is to play, proceed as in the 6GS-rule book.

Vengeful enemies are pursuing the player’s band. Play proceeds as per the 6GS-rule book except:
Roll 1d6 to determine the pursuit
1-3 Posse
4-5 Rangers
6 Soldiers

To count coup a character must make a successful hand to hand attack on an enemy figure.
The attempt at coup counting is declared before the attack die is rolled.
A successful attack accrues points but does not harm the defender.
Coup may only be counted once on any given enemy.

Every time a character kills an armed enemy in an encounter he receives 5 points.
Points earned for successful encounters are awarded as for other character types.