When the Mega-Cities decided to convert Titan from an airless prison to a habitable planet, everyone knew it wasn't going to be easy. The initial colonists would have to be very hardy and adaptable to survive long enough for their terraforming efforts to have effect.

Enter the Apes. Intelligent apes had been marginalized back on earth, being neither human enough to prosper nor animal enough to warrant the pampered life of their less developed cousins in the zoos.

Inevitably when human colonist's arrived the pioneer apes, euphemistically dubbed Titan's First Families, were faced with the same problems they had hoped to leave behind when they left Earth.

The vast majority of the ape community on Titan, as on Earth, are law abiding citizens just doing what they can to carve out a nice living for themselves and their families.

But inevitably a few have turned to a life of crime.

Recent Judicial actions in the wake of the Passenger 135 Killings have left a power vacuum, and crime hates a vacuum... 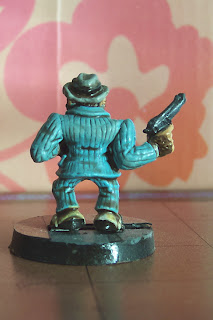 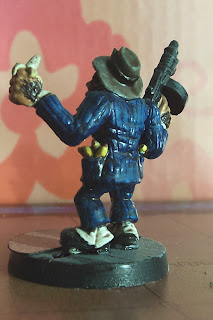 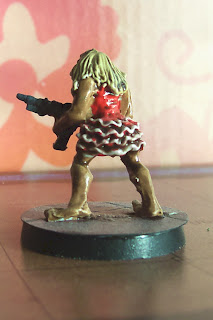 With Muskets and Mohawks 2 off to the publisher, I finally found some time to paint. Not a big fan of  painting really, but I do like to have the finished product so "needs must" as they say.


Re-painted a selection of witches a friend had painted for me, only because my plans for them had changed.  Also finally got work on these beauties.


Probably should have waited until I got back into the swing of things but just couldn't. Always loved these figures. In particular the way the big guy has his pockets stuffed to bursting with bananas.


Have some ideas for incorporating them into the Titan Rangers games but for now going to keep on painting.


Hope you like them and thanks for stopping by!
Posted by M. C. Monkey-Dew at 4:23 PM